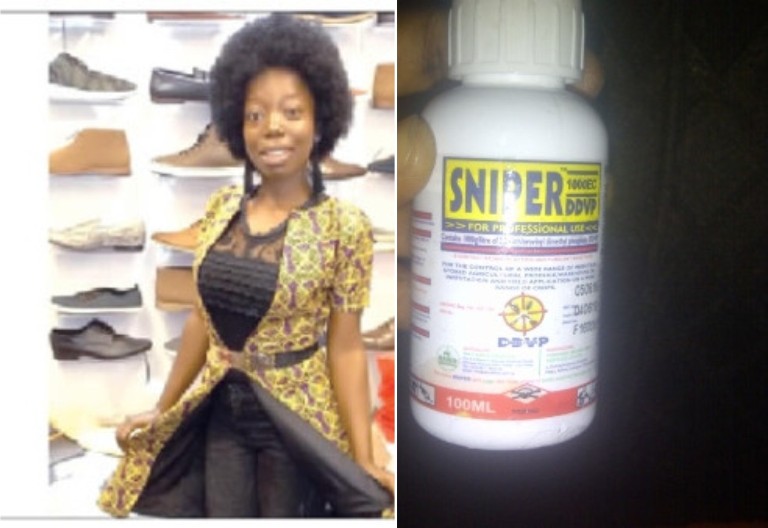 A lady who fell into severe depression after her boyfriend killed himself three months ago has also killed herself.

The young woman, Adenike Fatai who was an apprentice at a tailoring shop in Lagos killed herself after her boyfriend identified as Bayo Atanda committed suicide.

The 25-year-old indigene of Kwara state took a bottle of poisonous substance suspected to be sniper after she has been reportedly battling with depression since she lost her boyfriend.

The deceased who lived with her mother at Igbekele Street, Iyana Cele bus stop, Shibiri area of Lagos state left no suicide note to ascertain the cause of her death.

Though she left no suicide note, a quick check on her Facebook page revealed that she engaged in posts which centered on death and depression. It was further learnt that her trauma was heightened by her late boyfriend family and friends’ allegation of causing his death.

According to Punch reports, Tawa, Adenike’s mother who confirmed her death disclosed that she met her dead after she returned home from an evening prayer.

She said, “That day, she finished cooking around 7pm and ate. She was outside after eating while I went to the mosque. Around 8pm, she came to the mosque to collect the key to our apartment and I told her to check the shop.

“On getting home some minutes after, I saw her lying on the floor with a bottle of sniper beside her. I called for help but it was late.

“She was learning tailoring in her sister’s place in Ikorodu. All of a sudden, her boss sent her away. She told me she had got another place to learn the vocation in Orile and that she would be living with a friend. I asked her to come and learn it at my place but she refused.

“Whenever I asked to see the friend, she would say she was not around. It was when I threatened to disown her that she told me she was living with her boyfriend. I tried to convince her that what she did was wrong, but she said the man’s (Bayo’s) house was close to where she was learning tailoring. I met with the man and he said he really wanted to marry her. He looked very gentle. We were planning the introduction when he died.

“On a Sunday around 11pm, my daughter called me and started crying on the phone. She said Bayo drank sniper. They took him to the Lagos Island General Hospital, but he died the following morning. That time, she said she would follow him and I tried to caution her.”

Tawa admitted that Adenike got depressed after her boyfriend’s death and even relocated to Ikorodu area of Lagos state. She however said she (Adenike) returned after her condition improved.

“I never thought she was thinking of suicide because she looked happy. Some clerics warned us that death was hovering around her and I prayed over it.

“I learnt she called somebody that evening and told the person that she wanted to go and meet Bayo and that she would drink sniper. I don’t know the kind of love she had for him.

“There was a day a friend of Bayo called her and accused her of killing him. I told her to ignore them. The mistake I made was that I should have changed her SIM card,” she added.

Also confirming the death of his daughter, Adenike’s father said he never knew she was battling depression. Idris said he only spoke to her on the phone since he separated from her mother.

“Since her mother and I separated, I usually talked to her (Fatai) on the phone. Probably she would have told me what was bothering her if we had the opportunity of seeing each other” he said.