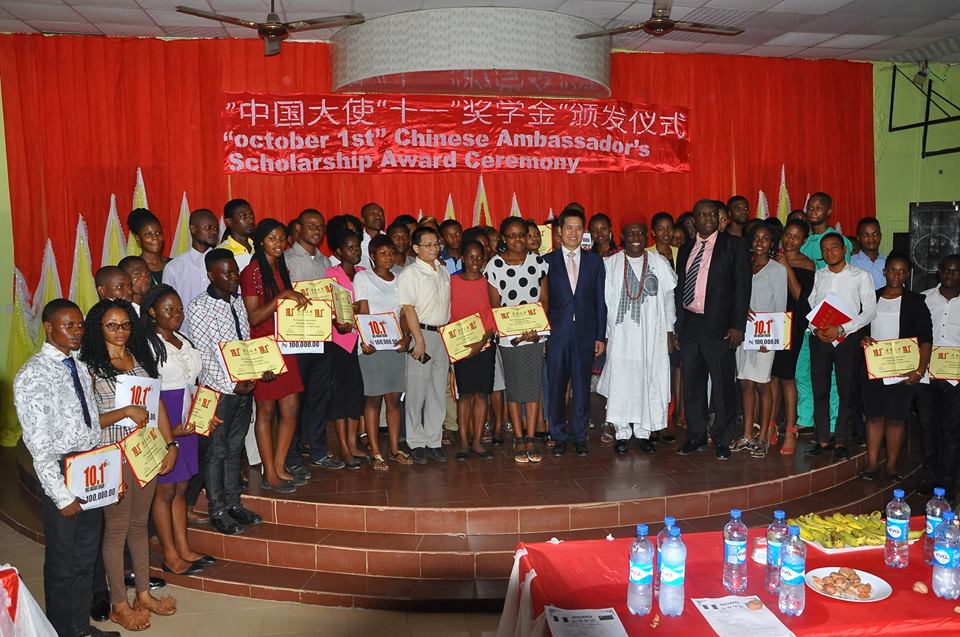 Forty-eight students of Nnamdi Azikiwe University Awka have benefitted from the yearly scholarship scheme of the People’s Republic of China.

The scholarships were handed over to the students by the Chinese Ambassador to Nigeria, Dr. Zhou Pingjian at the auditorium of the institution.

Speaking at the occasion, Pingjian congratuled the beneficiaries, describing their institution as African champion in terms of learning of Chinese language and culture through the Confucius Institute.

He said 4% China’s Gross Domestic Product was budgeted to education, which he said, had reduced the illiteracy level of the country from 80% at its formation in 1949 to 3% presently.

According to Pingjian, education remained the bedrock of China’s development and extending a helping hand to indigent students would go a long way to assisting them actualize their dreams.

According to Pingjian, education remained the bedrock of China’s development and extending a helping hand to indigent students would go a long way to assisting them actualize their dreams.

He said, “Education is the key element in China’s development. In 1949 illiteracy level was 80%. Now, it is under 3%. This is because we give priority to education. We respect teachers and value education.

“The scholarship is part of commemoration of October which is a special month for both China and Nigeria which began their life that month and also the month of the birth of the Vice Chancellor of the university.”

Responding, UNIZIK Vice chancellor, Prof. Joseph Ahaneku commended the ambassador for the gesture, saying that it was an indication of his love for not just Nigeria and Africa but for the institution.

He said the scholarship was a demonstration that finance could not stand as a barrier to students’ education attainment.

“Last year, 47 students were awarded scholarships by China. This year, 48 students are benefiting. This is a reminder of China’s relationship with UNIZK,” he said.

Ahaneku added that the population of Confucius Institute has grown so much that a lot of students in the university were presently excelling in the study of Chinese language and culture.