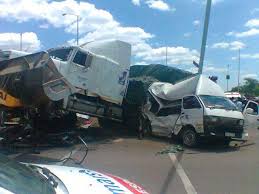 No fewer than two persons were burnt to death and goods worth thousands of Naira were destroyed in a multiple accident involving five trailer trucks and two J5 buses.

The accident which happened at about 11:00pm on Tuesday, December 18, 2018, at old Zango-Idakoivo slope, Okene, had all the seven vehicles burnt to ashes, thus leading to total halt of vehicular movement along the ever-busy Okene- Lokoja highway

The incident forced travelers on the road to pack their vehicles to avoid the fire from the burning vehicles.

It took officers of Okene FRSC unit command, supported by members of the community, several hours to put out the fire on the burning vehicles.

Speaking on the incident, the unit commander of the FRSC Okene command, Dr. Adelaja Ogungbemi, explained that the multiple accident was caused by brake failure on the part of one of the trailers which lost control and rammed onto other vehicles, adding that the impact of the accident ignited the fire that consumed all the vehicles involved in the disaster.

The FRSC unit commander said that officers of his unit did all they could before they were able to put out the fire at 10: am on Wednesday, December 19, 2018.

He charged vehicle users to ensure that their vehicles were in order before they put them on the road even as he expressed hope that both the Federal and Kogi State governments would make efforts to fix alternative routes in the area before the Yuletide period, in order to ensure free flow of traffic.