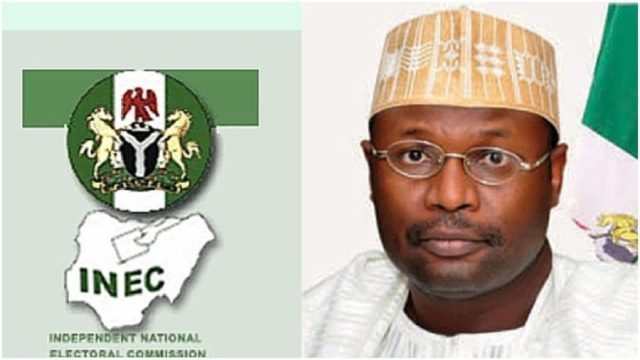 I congratulate you for succeeding against all odds in giving our beloved country another election. It is particularly impressive and to your credit, too, that the 2019 elections rank among the most peaceful in the history of our democratization experiment. While the security agencies and the Commander-in-chief should take good credit for this, I want to sincerely commend you for making their jobs easier. I do hope you are having a deserved rest, after over one year of sacrificing your time, energy, intellect and almost, your life, to organizing an election for us, and giving legitimacy to the power of a few thousands of people to rule over millions of us. Thank you Prof, and may posterity be kind to you, in this regard.

The issue for which I have chosen to write to you, may have been over-flogged by several individuals, including lawyers and top politicians, and I had wanted to avoid writing this letter, in fear that it may not change anything, especially, considering my known interest in this whole matter. However, I do not think that it will be fair to reach a conclusion on matter without having walked the beginning and the middle. Writing this letter to you, is my own way of walking the middle in the matter concerning your very unpopular and clearly political decision to withhold Governor Rochas Okorocha’s Certificate of Return, after he had been declared winner as the Senator-elect for Imo West Senatorial District. Every enquiry from the Constitution of this our great country, Electoral Act, history and other relevant authorities shows that this is a most ignominious precedent, that the commission under you is setting. This, being the first time, the electoral umpire is taking up the responsibility of the judiciary, in an election it organized.

I want to concede once again that you are among Nigeria’s most brilliant scholars, and I have been given no reason before now to doubt your integrity. This, I must confess is the opinion of a good number of Nigerians. While the younger generation of Nigerians, where I belong, look up to you as a role model, the older generation look up to you with positive envy. This is because the position you occupy is among the most valued in the country and it is not a position that is given to just about anybody. To have earned this appointment, you passed high stake integrity tests. Let me confess also, that I appreciate your predicament. You are torn between safeguarding your highly cherished integrity by acting in line with the Constitution of the Federal Republic of Nigeria and in line with democratic tenets across the world, and advancing the interests, no matter how illegally peculiar, of a formidable cabal, thereby, protecting your job now, and maybe, in the future. If I am to recommend anything to you, as a fellow citizen, a brother and even as a son to you, I would commend you to stick with your conscience, the Constitution and the people.

Listen to the walls, the grasses and put your ears out in the market place, everyone knows or thinks that you could not have on your own volition taken the side you took in this matter, without interferences from some highly placed individuals, who believe that stopping Governor Okorocha’s rise in politics, is key to strengthening their own platforms for greater growth. The truth is that I do not quarrel with these men for conspiring to stop my Governor from overtaking them, because democracy is all about conspiratorial competitiveness. However, I am ashamed as an aspiring academic, that an academic of your repute and standing could be said to have allowed yourself to become a pawn in the hands of very crude politicians. The story on the streets even beyond our shores, is that you are in a cage, and you do not have a mind of your own, that you are some people’s stooge, and you are willing to bend backwards in order to keep these few people happy. I find these suspicions difficult to agree with, but I also find it difficult to believe that you could lend yourself as a tool to persecute another Nigerian, whose only sin, is that he nurses an ambition, and supported the ambitions of some younger individuals.

You hinged your reason for withholding governor Okorocha’s Certificate of Return on the unproven allegation by Professor I.I Ibeawuchi, that he declared Governor Okorocha winner under duress, without as much investigating to find out if he was actually under duress to say that he was under duress. I am a constituent of Governor Rochas Okorocha, and I know how massively the people voted for him. I am also educated enough to know that a Returning Officer should have no input in the figures of an election. A Returning Officer’s job is to announce what has been collated and computed by the Presiding Officers at the booth levels, the collation officers, at the wards, LGAs and up to the final Collation center, where the final result would be announced. A Returning Officer’s job is more or less ceremonial. At what point did the Returning Officer find out that he was under duress? Why did he announce results from nine out of twelve local government areas and suddenly chose to move to Owerri? What information does he have about security that the Army, Police, DSS, Civil Defense and other security agencies that were there didn’t have? What really constituted duress? Did he get any information that some people were coming to set the collation center ablaze? If he did, why didn’t he inform the Police? And with the massive deployment of security officials, why didn’t he think, whatever threat he faced had been taken care of? Could it be spiritual duress? If he had mentioned that, we have a good supply of Pastors, Imams, dibias and exorcists in our State, especially in Imo West. Arondizuogu, Akokwa, Isu and other towns known for having good communion with the spirits are all in Imo West District.

Let me inform you Sir, that Professor Ibeawuchi may have been under duress to scuttle the wishes of Imo West people, but having failed to deliver on that ignoble deal with his paymasters, he got under further duress to taint the mandate of His Excellency Owelle Rochas Okorocha and leave the people of Imo West without a representative for as long as the cabal wants it. I plead with you, to retract from helping these politicians in their obvious political witch-hunt against Governor Okorocha.

Two of the candidates who were defeated in that election have approached the tribunal to state their arguments against Governor Okorocha’s victory. I think, the judiciary is the right place for such arguments to be taken, not in INEC offices. If the Returning Officer can substantially prove that the results used in declaring Governor Okorocha winner in that election was doctored in anyway, the tribunal will expectedly give a verdict that should be in tandem with the law and conscience. What you have allowed the Commission under you to be used in doing could be sub judice, as you have by your actions tried to predetermine the verdict of the judiciary. Part of the arguments of the PDP and APGA candidates in that election is that you have declined to issue Governor Okorocha his C of R because you do not believe that he won the election. Why don’t you allow the judiciary do its work without interfering or trying to blackmail them with certain actions and utterances?

I am also aware that there were more glaring cases of duress, as claimed by your returning officers, yet, you have not wasted any time in issuing the beneficiaries of such duress with their certificates of return. In several constituencies across the country, there were reported cases of intimidation of poll officials by some politicians, with some Returning Officers claiming that they declared certain individuals winners under duress, yet, these people were given their certificates of return, but Governor Okorocha’s case is different.

Beyond the withholding of Governor Okorocha’s Certificate of Return, you have lent yourself to be used to victimize and intimidate many politicians seen to be affiliated with Governor Okorocha. To that extent, you have turned Imo State to a political field of the most absurd political fraud and impunity. It is only in Imo State, that more than two months after conclusion of elections, we are yet to know who is our elected Senator for Imo North Senatorial District, thereby, putting those constituents in a position where they may not have a Senator for the next four years. It is only in Imo State, where an elected member of the House of Representatives who was originally issued a Certificate of Return has seen that certificate withdrawn. The excuse that a court gave an order to that effect is baseless, as you know that the person affected by such judgment still has the right and window to appeal the judgment. Your haste in issuing out a fresh certificate of return to the beneficiary of that judgment raises serious doubts about your integrity and impartiality.

Prof. Sir, by your position, you are supposed to be the most impartial adjudicator in electioneering issues and when you allow yourself to get into the mix of partisanship, it leaves a very dangerous signal in our democracy. Leave partisan politics for politicians, leave political persecution for political hawks and let justice go its course. We have a very young democracy and an umpire who exhibits the level of partisanship as you have done, especially, in cases concerning Imo State APC and AA, is a clear danger to this young democracy.

I wish you well as I hope that you will find somewhere in your patriotic heart to consider correcting some of the injustices you have allowed your imprints on.

I am your fellow countryman,
Onwuasoanya FCC Jones.