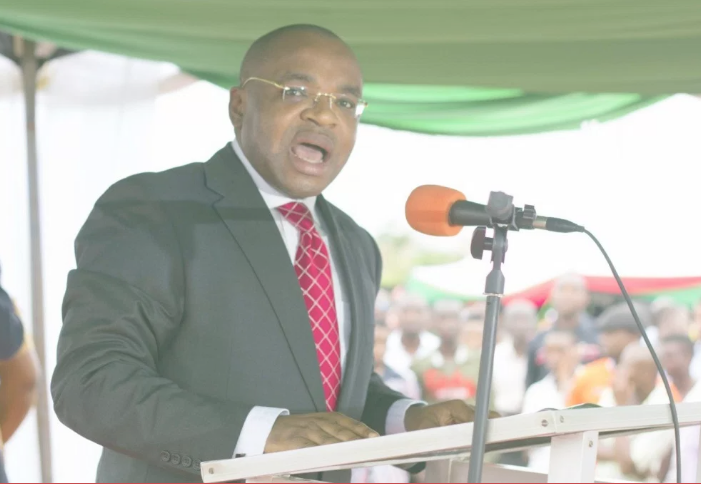 The presidential election, including national assembly elections, holds on February 16, while the governorship and state house of assembly is on March 2.

The Independent National Electoral Commission (INEC), as it has become the practice, would be using NYSC members as ad hoc officials for the conduct of the elections.

Mr Emmanuel made the shocking appeal on Saturday at a political rally in Obot Akara Local Government Area of the state.

The governor after acknowledging the presence of his wife, Martha, and other dignitaries at the rally, went on to ask if there were NYSC members at the rally.

“Yes!” some voices responded from the crowd.

“You are the ones that will do elections!” Mr Emmanuel said from the stage where he stood to address the rally.

“You know how you do it!

“When you are doing it, remember PDP!

“When you are doing it, remember PDP-o!” the governor said.

“Gowon is a member of PDP, in case you don’t know,” the governor continued, after asking the crowd if they knew who started the NYSC programme in the country.

The NYSC is a scheme for Nigerian youth in place of mandatory military conscription which is non-existent in the country.

The programme was initiated in 1973 during the military administration of Yakubu Gowon.

Mr Gowon, 83, is not known to be currently involved in partisan politics.

Mr Akpabio, a former governor of the state, is seeking re-election as a senator under the All Progressives Congress (APC).

The senator had defected from the PDP to the APC in August last year, igniting a political storm in Akwa Ibom and across Nigeria.

“I can sign my signature on him, he will not betray you people, and he will not betray PDP” Governor Emmanuel said at the rally while soliciting votes for the PDP candidate, Mr Ekpenyong. “Nobody loves Obot Akara and Ikot Ekpene Senatorial District like Chris Ekpenyong.”

The governor urged the people of Obot Akara to give Mr Ekpenyong 100 per cent votes in the election.

He said it would make a perfect combination for Mr Ekpenyong to be at Abuja, while he, as governor, controls the state.

“I have checked records, this is the first time Obot Akara is going to produce a senator,” he added.

The governor, who said his administration has built roads and bridges in Obot Akara, promised to do more for the area if he is elected for a second term.

In his remarks at the rally, Mr Ekpenyong told Governor Emmanuel, “We have finished campaigns, we have finished the election. We are only waiting for the D-day.

“We know how to do elections,” he assured Mr Emmanuel. “When we finish in Obot Akara we will move on to another part of the state to give support to those who don’t know how to vote.”

Mr Ekpenyong warned those who have “federal might” not to dare step foot on Obot Akara and the entire state on the Election Day.

“We will surely extend our boundary from Obot Akara to all parts of Akwa Ibom,” he said.