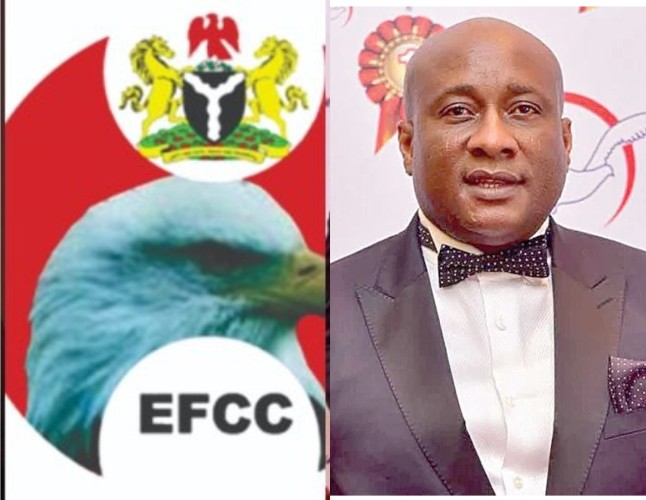 Detectives at the Economic and Financial Crimes Commission EFCC have grilled Allen Onyema, the chairman of Air Peace airline over his indictment in a $44.9 fraud by the US government.

Recall that last week, the US Department of Justice released a statement accusing Onyema alongside his airline’s Chief of Administration and Finance, Ejiroghene Eghagha, of “moving more than $20 million from Nigeria through some United States banks in a scheme involving false documents based on the purchase of airplanes.” Eghagha was also accused of bank fraud and committing aggravated identity theft in connection with the scheme. The US Department of Justice also accused Onyeama and Eghagha of using the money laundered to buy luxury cars, including a Rolls Royce for $180,000 and Mercedes for $88, 500 among others.

Although Onyema has since denied any wrongdoing, a source in the anti-graft agency who spoke with the Nation, said Onyema was interrogated on Wednesday November 27th and has been placed on administrative bail.

“Our team of detectives on Wednesday interacted with Onyema in our Lagos office on the wire deals, especially on issues involving money laundering. The questioning was part of our ongoing collaboration with the FBI and other agencies in line with the Mutual Legal Assistance Treaty (MLAT) between Nigeria and the United States.

We decided to release Onyema on administrative bail in deference to his constitutional right of innocence until proven guilty. But Onyema is on surveillance by the EFCC pending the conclusion of the ongoing investigation.” the source said

The source also explained why Onyema and Eghagha where being investigated by the agency despite the fact that the accusations against them was filed in the US.

“There are vital Nigerian components of the indictment and demands of the US Government. For instance, the US is seeking the forfeiture of over $13 million left in some accounts linked with the suspect in the United States and Canada. The funds are $4,017,852.51 in JP Morgan Chase Bank in the US and $4,593,842.05 and $5,634,842.04 in the Bank of Montreal, Canada.

“We cannot rule out some of the money in some accounts in Nigeria. And our investigation may reveal the identities of other accomplices. Also, two Nigerian banks have been mentioned in the wire deals, especially transactions on purchase of aircraft. If there are assets to be seized in Nigeria, we have to collaborate with the US Government on the forfeiture process.” he said

The source also added that a former Special Adviser/Coordinator of the Amnesty Programme Office is being investigated in connection with the fraud.

“The suspect has gone underground. We may have no choice but to watch-list the ex-Special Adviser. We will eventually place him on INTERPOL red alert. Preliminary findings revealed a nexus between Amnesty Office and the activities of Onyema’s firms/groups/ NGOs as applicable. These groups include the Foundation for Ethnic Harmony, International Centre for Non-Violence and Peace Development, All-Time Peace Media Communications Limited and Every Child Limited.

“Our detectives discovered that the Foundation for Ethnic Harmony in Nigeria (FEHN) handled the training and transformation of some former Niger Delta militants for both the Amnesty Programme Office and the Niger Delta Development Commission (NDDC).”

Responding to a question, the source said:

“We are probing allegation of money laundering which led to the buying of exotic vehicles by Onyema. He blew about N170,100,000 ( $472,500) on three vehicles with cash transferred into his BOA 8086 account from Nigerian and other foreign bank accounts. We want him to explain the sources of the cash.”

The indictment reads in part:

“Between April 2010 and January 2016, Onyema transferred millions of dollars into his BOA 8086 account from Nigerian and other foreign bank accounts, including hundreds of thousands of dollars transferred directly from accounts for Foundation for Ethnic Harmony, International Center for Non-Violence and Peace Development, All-Time Peace Media Communications Limited, and Every Child Limited.

“Between on or about March 2, 2016, and May 10, 2016, Wells 8020 received numerous wire transfers totaling hundreds of thousands of dollars from his bank accounts domiciled in Nigeria, including but not limited to the bank account for All-Time Peace Media Communications Limited and Foundation for Ethnic Harmony.

“From March through May 2016, Onyema made numerous cash withdrawals from WF 8020 totaling hundreds of thousands of dollars. WF 3417 was used to pay for personal expenses, including purchases at Atlanta, Georgia locations of Prada, Neiman Marcus, Macy’s, Louis Vuitton, the Apple Store, and various airlines.

“On or about November 14, 2017, Onyema opened a business savings account ending in 2151 (JPMC 2151) at a JP Morgan Chase Bank branch in Atlanta, Georgia. Both JPMC 5512 and JPMC 2151 were opened in the same name of Springfield Aviation Company, LLC, and Onyema was the sole authorized signatory on both accounts.

“In total, from 2010 through 12018, wire deposits amounting to over $44.9 million transferred from foreign accounts into Onyema’s Bank of America, Wells Fargo, and JP Morgan Chase accounts.”