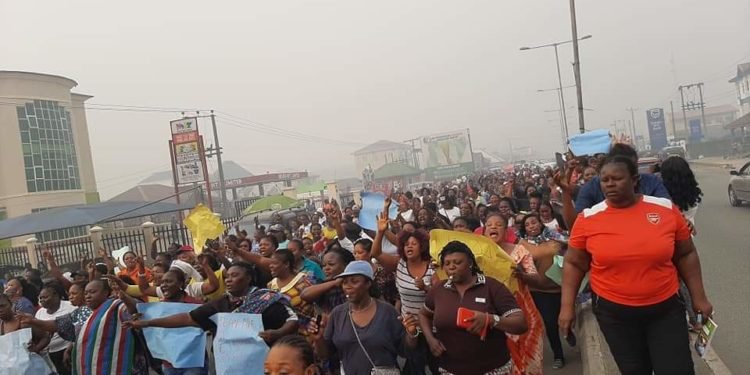 Different parts of Bayelsa state have been hit by massive protest following the Supreme Court’s judgement that stopped the inauguration of David Lyon as the governor of the state.

Thousands of women took to the streets blocking major roads to protest the judgement insisting that no handover of power would be conducted in the state without Lyon.

It number of casualties could not be confirmed, but it was learnt that soldiers and policemen were drafted to the area to contain the situation.

Before the security agencies arrived, it was learnt that irate youths made bonfires of at the Tombia roundabout and Akemfa, but calm has been restored.

Bayelsans seem to be unsure and anxious to see if the Independent National Electoral Commission, Abuja, will issue a Certificate of Return to Senator Duoye Diri as ordered by the Supreme Court.

The protesters that hit the streets on Friday morning in parts of the state were calling for Lyon reinstatement as they were armed with placard.

One of the commuters, who spoke in confidence, said she ran into the obstacle created by the rioters describing her experience as terrible.

She said:  “It was a terrible experience when I ran into them. They refused to vacate the major road. There was no vehicular movement of any sort. People were forced to return to their homes.”

However, another venue was being prepared in front of the Governor’s office in Government House by the Peoples Democratic Party (PDP) in anticipation that its candidate, Senator Douye Diri, would be issued a certificate of return by the Independent National Electoral Commission (INEC).

Bayelsa State Governor, Seriake Dickson, has insisted that his candidate, Senator Douye Diri, would be inaugurated as the new Governor of the state following the judgement of the Supreme Court.

But the State All Progressives Congress (APC) has warned against inaugurating Diri as the state governor saying he did not meet the constitutionally electoral requirements for inauguration as directed by the court.