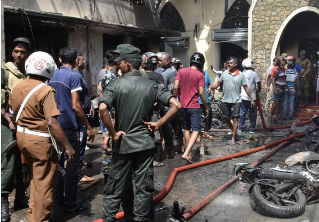 Four cities of Sri Lanka has been hit by a series of deadly suicide bombings on Easter Sunday which has left at least 185 Dead and 470 Injured.

The police has reportedly said that the wave of bombings which targeted Roman Catholic churches and hotels across the country was a thoroughly coordinated attack.

The apparently string of bombings were reported to have begun on Sunday morning at around 9 am, as local Catholics flocked to churches to mark Easter mass. The attacks concentrated on Sri Lanka’s capital, Colombo, on the western side of the island, as well as the city of Negombo 35 km to the north, and Dehiwala, about 10 km to the south. On the opposite side of the island, the city of Batticaloa was targeted.

TheIndependent reports that In Colombo, St. Anthony’s Shrine was hit by a bombing attack, with four hotels including the Shangri-La Hotel, Cinnamon Grand Hotel, the Kingsbury Hotel, and Tropical Inn Hotel near the National Zoological Garden also targeted.

A Sri Lanka hospital spokesman confirmed that the blasts on Easter Sunday have killed several people.

In Negombo, St. Sebastian’s Church was hit during mass. In Batticaloa, meanwhile, the Zion Church was rocked by a powerful explosion that led to over 300 injuries, according to local hospital officials.

With an eighth explosion hitting the Colombo suburb of Orugodawatta on Sunday afternoon, casualty figures remain fluid, although police have estimated that at least 185 people have been killed, with over 470 suffering from non-fatal injuries as of mid-day Sunday. At least two of the blasts were caused by suicide bombers, police have said.

According to hospital sources cited by Agence France-Presse, the attacks have killed 35 foreigners, including UK, US, Japanese and Dutch nationals, and wounded multiple others.

Sri Lankan authorities have vowed to deal with the terrorism, with President Maithripala Sirisena telling reporters that he had instructed security forces “to take very stern action against the persons who are responsible for this conspiracy”.

At the same time, Sirisena urged Sri Lankans to show patience and restraint, with Prime Minister Ranil Wickremesinghe echoing the sentiment and calling on the island nation “to remain united and strong” during “this tragic time” and to “avoid propagating unverified reports and speculation”.
Police have already cordoned off the affected areas to engage in search operations and begun investigations, with a curfew announced across the country to start at 6 pm local time.

As a precautionary measure, authorities have temporarily blocked access to all social media platforms across the island, saying the measure was aimed at preventing “incorrect and wrong information being spread”.

No group has taken responsibility for the Easter morning violence. Sunday’s terrorism was the first violence of its kind, and on such a mass scale, since the Sri Lankan Civil War.

On Sunday afternoon, AFP reported that Sri Lankan police received a warning from a foreign intelligence agency on 11 April that militants from Thowheeth Jama’ath, a radical Islamist group, were planning to carry out suicide bombing attacks against major churches across the island, as well as the Indian High Commission in Colombo.