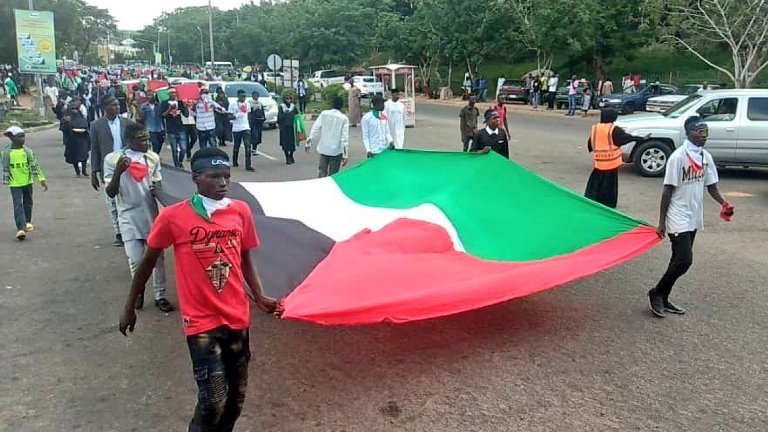 The Islamic Movement in Nigeria has carried out its Ashura mourning procession in Abuja, in defiance of the police.

The Ashura procession is an annual religious ritual carried out by the Shia Islamic sect all over the world on September 10.

Participants including men, women, and children held the procession for a few kilometres from Berger Roundabout to Wuse, and hurriedly concluded the exercise to avoid a confrontation with security personnel.

It was learnt that the procession which commenced by 8 this morning lasted for about 25 minutes and cased traffic gridlock in the commercial area, but there was no report of any incident.

None of the IMN spokesmen could be reached for comment as calls to their phones rang out.

The Shi’ites had on Monday raised the alarm that the police were planning to attack the Ashura mourning procession holding in Abuja and other cities in the North.

The Shi’ites said that they had credible information that the force “will employ extrajudicial approach to assault, arrest or kill whoever participates in the religious event.”

A member of the Academic Forum of the IMN, Abdullahi Musa, who said this in a statement, invited religious leaders, Civil Society Organizations, Non-Governmental Organizations, the international community, journalists and the public to monitor the conduct of the Ashura procession “in order to expose those that are so desperate to cause violence for a pittance.”

In their reaction, the police had warned the sect against carrying out the procession, stating that by virtue of the Terrorism (Prevention) Proscription Order Notice of July 26, 2019, the IMN had been proscribed in the country and cannot hold any procession.

The force spokesman, DCP Frank Mba, said any gathering by the Shi’ites “will be treated as a gathering in the advancement of terrorism.”

Meanwhile, security operatives have locked down the Abuja-Keffi Expressway apparently to prevent the Shi’ite members living in that axis from coming to the city centre to participate in the procession.

It was gathered that the checkpoint mounted by a joint team of police and other security agencies barricaded the road.

A journalist, Richard Oludare, said he had been trapped in the ensuing traffic gridlock for over two hours.

“I left the house by 6:00 a.m., but it’s past 8:00 a.m. and I’m still trapped in the traffic jam. The security agencies blocked the road and only allowed a vehicle to pass at a time,” he said in frustration.