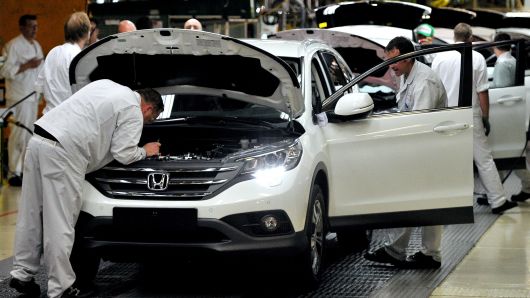 About 3,500 jobs are under threat as Honda is set to shut down its only factory in the United Kingdom.

The Japanese carmaker said Tuesday that it will shut down a major manufacturing plant in the English town of Swindon that employs 3,500 people. Thousands more jobs will be put at risk at suppliers and other businesses.

Honda has made more than 3 million cars in Swindon since its plant there opened three decades ago. The plant, which will close in 2021, currently produces up to 150,000 Civics a year for over 70 countries.

Swindon is the Japanese company’s only car plant in the European Union. The restructuring will also involve Honda’s business in Turkey, which currently produces 38,000 Civic sedans per year. That will cease in 2021.

Honda said that production would shift to Japan, North America and China.Honda Motor Europe President Katsushi Inoue said in a statement that the restructuring is needed to “accelerate our electrification strategy” as the auto industry seeks to overcome “unprecedented changes.”

The statement made no reference to Britain’s decision to leave the European Union, and Honda CEO Takahiro Hachigo said in Tokyo that the decision was not related to Brexit.

But uncertainty concerning Britain’s future trading relationship with its biggest export market is one of the big clouds hanging over the car industry.