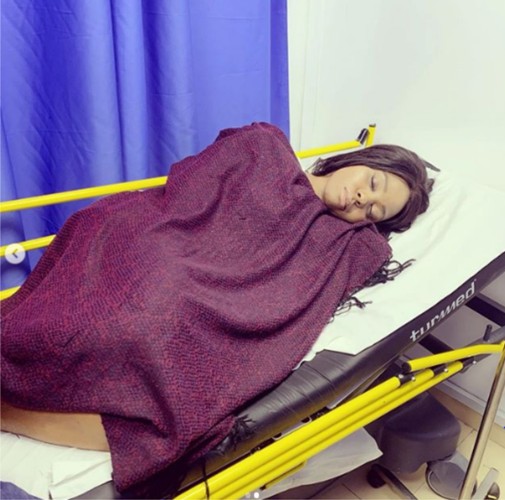 A Nigerian business woman has taken to social media to narrate her ordeal in the hands of officers of the Nigerian Police Force in Lagos while she was going home after work at 1:00am on Friday.

The lady known on Instagram as @miznwanneka narrated how she was physically and even sexually harassed by the officers who stopped the car she was in not long after she left her office.

According to miznwanneka: “So I was going back home from work at exactly 1am this morning and this police men ,I don’t even know what this ones are called , stopped the car I was in and asked us to open the car for a search which we did and he searched everywhere , came to where I was sitting and tried to forcefully open the middle compartment , I said “ oga use the bottom Abeg don’t force it .

“Then this police man who I assumed was already high on drug or something started shouting that y must I tell him that , I was first shocked and trying to understand where the sudden shout came from and he immediately started saying , you must be mad and all the curses on his mouth .

“It was 1am in the morning , and the only thing I could do was try to reach out to my phone while he was still shouting . Immediately he saw my phone , he forcefully tried to take it from me , I quickly put the phone under my skirt and the police put his hands right under my skirt and took the phone. I tried to reach out to my other phone , he held me sooo tight and broke 1 of my nails , I started bleeding , I got down from the car and held his shirt , then 2 more came out , started dragging me everywhere .3 men on 1 woman😳 wow @nigerianpolice u can do better .

“They dragged me untill the broke 3 other nails and all 3 started bleeding again . I held the man, told him to kill me which he actually tried to do . I took off my sneakers and told him we will both die there today .

“All 3 of them started assaulting me and pushing me around untill people came around and they started begging . I refused and told them they must take me to the station since that’s what they wanted to do , I held on to his shirt cause they were trying to run away and of purse , all 3 of them over powered me , and then ran away with my sneakers.

“@nigerianpolice@nigerianpoliceambassador@ruggedybaba I need you people to help ask this people what criminal offense they caught me on before inflicting all these injury . I was quietly sitting in the car while they were searching , I stopped when they asked I stoped , I didn’t stop them from doing their jobs untill they guy started abusing me .this was happening just 2 mins away from my office .”

“Dear @nigerian_police_academy@opetodolapo it’s almost time to prepare the kids for school , I’m in the hospital taking different pain killers , unable to even wear back my wigs with my hands cause all my body aches from the too much dragging .

“If I woman can be treated this way, I wonder wat will happen to a man. I won’t stop till you all come out and tell me exactly wat the offense was this night. If I didn’t stop , it will probably be said I was an armed robber , but now your men stole my shoes and I need it back (so they are the robbers )

“If I refused a search , maybe it will be said that I was not law abiding . But I did all of that , but the animals you all work with still found faults . Mind you , every box in my car was opened and not for a second did I stop them . I only said “oga don’t force it , the compartment that was finally spoilt by your animals you put on the road .

“I was treated like common club girl , your men forced their hands under my skirt just to get a phone 🤷‍♀️ what more is sexual harassment? Untill they completely rape me ? I tried to atleast see if I can defend myself by holding on to the mans shirt and oh boyyy the other 3 came for me . After all the display , they started begging and even ran away.

“@nigerianpoliceambassador@opetodolapo@nigerianpolice I put it to you that you all are the Criminals you are looking for to arrest , you all are the rapist ,you all have the highest level of misconduct. @ruggedybaba plz help me get answers from this people cause I’m definitely not letting this go .”