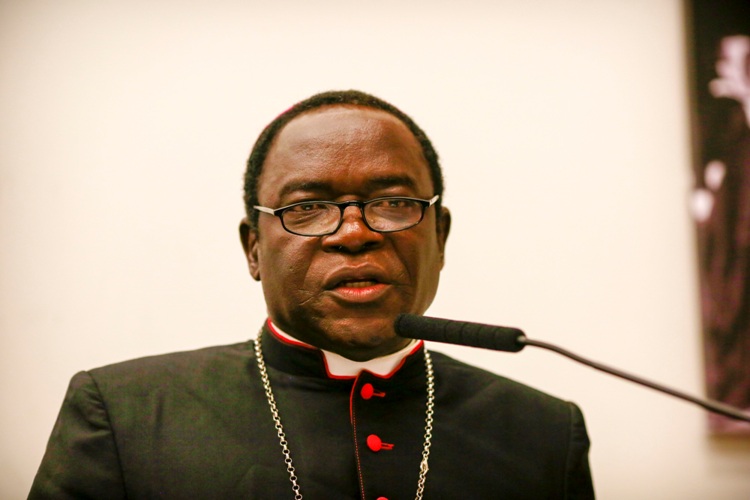 The Bishop of the Catholic Diocese of Sokoto, Matthew Kukah has received a serious threat from a Sokoto-based Islamic cleric, Abubakar Malami.

Malami warned Kukah to desist from challenging the Buhari-led Nigerian government any further or risk being crucified.

This development comes amidst the severe criticisms surrounding the bishop’s Christmas message and subsequent statements he has made.

In a video reportedly sent to SaharaReporters, Malami, during a sermon, said if Kukah continues challenging the government, the bishop will be crucified and there will be no one to stop it.

“Not even the government will be able to stop us,” he said, towards the end of the video.

The cleric, who spoke in Hausa, said, “Matthew Hassan Kukah is already cursed by Allah. Therefore, if Kukah challenges the government, he will be crucified. We will not listen to anybody when we are crucifying him, not the government, not even the Sultan of Sokoto.”

Similarly, the Muslim Solidarity Forum had earlier asked Kukah to tender an unreserved apology to the entire Muslim Ummah over his recent “malicious comments” against Islam or leave Sokoto.

The organisation described the message as a calculated attempt to insult Islam.

JNI, in a statement in Kaduna by its Secretary-General, Dr. Khalid Abubakar Aliyu, said the bishop “should not take Muslims kindness for timidity or foolishness.”

It said despite the status of Sokoto to Muslims and Islamic history, Kukah was warmly welcomed, accepted, accommodated and accorded respect deserving of his position as a religious leader.

It described Kukah’s message as “irresponsible and seditious”, adding, “Though the message is disguised as a political hogwash to deceive the innocent, there is no doubt that it was a poisoned arrow fired at the heart of Islam and Muslims in Nigeria, hence the need for this intervention.

“The bishop’s statement was a prepared address considering the occasion and the audience, one cannot but agree that it was a calculated attempt to insult Islam, which is typical of him.

“His veiled insinuation that Muslims have a pool of violence to draw from, is disgusting, disheartening, as well as condemnable.

“Responsibly, Christmas homilies should come with messages of hope, unity, mercy, forgiveness of the Supreme Being and resilience through prayers, especially in this trying time.

“How can the Muslims continue to be hospitable to the one who proves to be ingrate many times over?

“How can the Muslims be comfortable in associating with a bitterly vindictive person disguised in the garb of religious clergy?

“Muslims in Nigeria cannot be charged and be held responsible or accountable for the actions or inactions of government just because it is headed by a Muslim.”

Kukah, in his Christmas message on December 25, 2020, had accused President Muhammadu Buhari of nepotism and institutionalising northern hegemony by “reducing others in public life to second-class status.”

“Every honest Nigerian knows that there is no way any non-Northern Muslim president could have done a fraction of what President Buhari has done by his nepotism and gotten away with it,” Kukah had said.