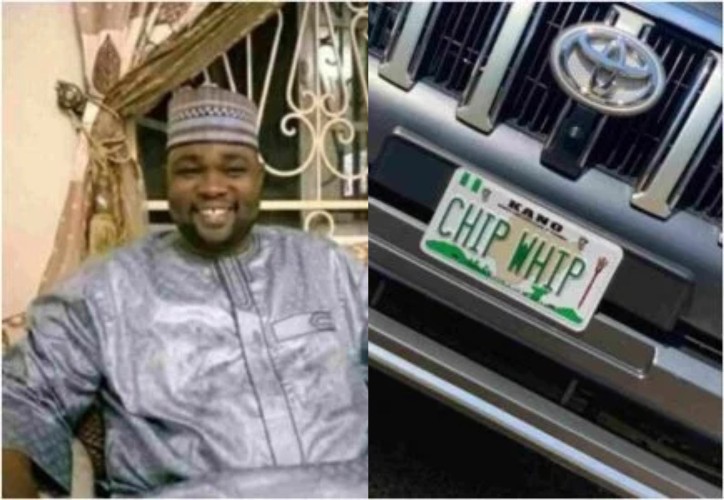 The Chief Whip of Kano State House of Assembly, Ayuba Durum, has reacted to news of the mis-spelt number plate Chip whip attributed to him, saying neither the vehicle nor the number plate belong to him.

The misspelt number plate has caused a social media storm, with commenters either blaming Mr Durum or FRSC for allowing it to pass the rigours of quality control.

While speaking with Daily Nigerian, Mr Durum said the vehicle could not be his as the state government is yet to give official vehicles to the members.

“I was baffled by a torrent of messages drawing my attention to a gaffe on a number plate purported to be mine.

“To set the records straight, members of the Kano State House of Assembly are yet to be assigned any official vehicles.

“I use my private vehicle with a regular not customised number plate. My vehicle registration number is Gaya, Kano, and whoever knows me can verify this,” he said.

The legislator said he had directed his lawyers to get to the roots of the matter and take appropriate legal action.

The Corps Marshal of FRSC, Dr. Boboye Oyeyemi, directed the Sector Commander of Kano State to investigate the origin of the vehicle number plate allegedly circulating in Kano.

The Corps Public Education Officer, Mr. Bisi Kazeem, disclosed this in a statement on Sunday in Abuja.

“The Corps Marshal has directed all field commands across the country to be on vigilance and clamp down on producers and issuers of fake number plates.

“We wish to state categorically that the said number plate did not originate from any of the FRSC Number Plate production centres, neither was it issued by the Corps.

“We are therefore making it abundantly clear to members of the public that FRSC as the lead agency in road traffic management and safety administration in the country has nothing to do with the said number plate.

“For the avoidance of doubt, FRSC with its International Quality Management certification (ISO 9001: 2008) has rigorous quality procedures for producing and issuing any of its security documents which makes the possibility of such obvious grammatical errors on any of its licences an impossibility,” he said.

He added that the colour of the graphics (Nigeria Map) on the plate is brown, instead of green that FRSC uses.

“All blanking and screen printing for such plates are done at the Gwagwalada production plant to ensure quality, uniformity and standards in line with quality procedures of the FRSC in all its produced number plates in contrast to this one.

“So, we can confirm with certainty that this number plate was neither produced nor issued by the FRSC,” he said.