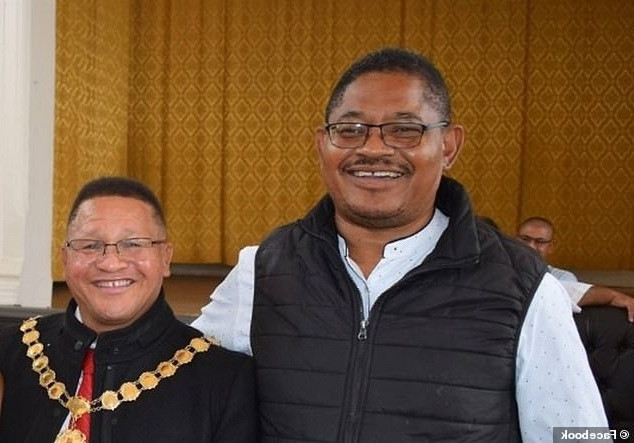 Jeffrey Donson who was convicted for child rape has been elected as mayor, while a convicted fraudster is elected his deputy, in a municipality in South Africa.

Donson was found guilty of statutory rape and indecent assault and jailed while he was mayor of the Western Cape’s Kannaland Municipality in 2008 but has been re-elected back into office.

Werner Meshoa was elected as deputy mayor despite being convicted of fraud and obstruction of justice during a spell as speaker.

The election of both to high office has sparked outrage across South Africa from gender-based violence groups to charities working with child rape victims.

Mayor Donson was handed just five years behind bars for rape but appealed to the Western Cape High Court where his conviction was not overturned but his sentence reduced.

For the sex attack of a minor, Judge Lee Bozalek suspended the prison term and instead fined him £1,000 and put him on a sex offenders rehab programme.

The two men now run the municipality on the Garden Route in Western Province after being voted in by 45 percent of the 25,000 electorates.

The African National Congress who received 21 percent of the voters backed the pair by agreeing a coalition with their party, The Independent Civic Organisation of South Africa (ICOSA).

In June Meshoa was sentenced for fraud to 18 months jail or a £300 fine and a suspended four-year prison sentence for obstructing justice and 36 months house arrest.

It was later revealed that Meshoa was sacked from his position as a teacher in 2012 for serious sexual misconduct with a pupil but the matter was not reported to the police.

Despite their convictions for child rape and fraud, the electorate still voted them into office with the African National Congress backing their election.

Amid a storm of outrage, ICOSA chiefs refused to boot them out, saying they could only be forced out if they served a year in prison.

They then ran in the Kannaland local elections this month and the men were reelected.

ICOSA now governs the municipality with the ANC. Respected South African news outlet News24’s Out of Order Index says Kannaland is the second worst-performing municipality in the Western Cape.

Kannaland’s ANC speaker Nicolaas Valentyn nevertheless slammed News24 for revealing the Mayor and his Deputy are convicted criminals as an ‘insult to voters’.

He said: ‘The successful inaugural meeting was met with an almost gleeful News24 shriek that so-called unfit individuals had been elected as Mayor and Deputy Mayor.

‘ICOSA will never be diverted by clickbait headlines of lazy rants by gossips arrogating as journalists and individual faults and frailties are no reason to give in’ he said.

Action Society, a pressure group lobbying against gender-based violence, called for the new Mayor Donson and Deputy Mayor Meshoa to be removed from office immediately.

Spokesperson Ian Cameron said: ‘Residents in Kammaland should know their newly elected candidates for mayor and deputy mayor are both convicted criminals.

‘One of the highest paying jobs in the local municipality is filled by a child rapist and the other by a fraudster. This seems like a plot for a badly written movie script’ he said.

Opposition parties and Gender-Based Violence groups and NGO’s representing child victims of rape have demanded that Donson and Meshoa be removed from office.

They were put into power in a coalition agreement with the ANC who supported them.

ICOSA’s Western Cape leader David Kamfe hit back, saying: ‘The people have spoken and we ask people to respect that they voted for Mr Donson and for Mr Meshoa’.

The Commission for Gender Equity said: ‘We view this development as a slap in the face of the fight against GBV and intend to engage all relevant parties in this matter.’

ANC provincial spokesperson in Western Cape Sifiso Mitsweni confirmed ‘grave concerns’ had rightly been raised by its members and the public over their election.

He said: ‘As the ANC we have a fundamental commitment to fight gender based violence and to oppose corruption and fraud and it is a matter that we take very seriously.

‘The ANC will not flinch on its principles and it is unfortunate ICOSA has decided to field such candidates and we are investigating exactly what the position is here’ he said.

Mayor Donson said he will reflect on his position adding: ‘Media inquiries about my 2008 statutory rape and indecent assault have greatly startled my family and me.

‘Although the event is years old it still haunts me and mortal wounds are bleeding again. I will spend time with my family over the weekend and decide my future.’