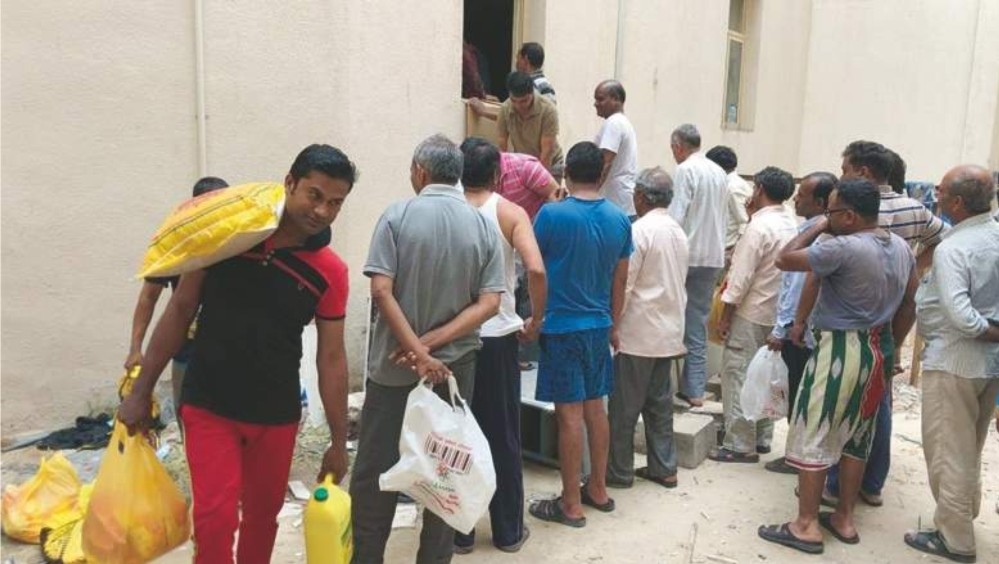 Various community members, including a church, poured in their help to over 1,000 workers who were unpaid for almost one year.

The church community took notice of the poor living conditions of the workers and took over the responsibility of providing them with food and other necessities.

On behalf of the church, Rev Father Lennie Connully, parish priest at the St Mary’s Catholic Church, told Khaleej Times: “We saw a post by the Indian Consulate on Facebook about these workers in distress and we sent a few of our parishioners to check. They were living in a deplorable condition and had no food or other basic necessities to survive. We decided to pack food items and toiletries for about three months for the workers. We learned that there were about 1,000 workers in the company’s Dubai Investment Park (DIP) accommodations, another 80 to 100 in Sonapur and about 150 in Ras Al Khaimah. So we started with DIP and then to the other areas.”

About 100 youngsters, all part of the church, took part in packing food and other needed items at the premises of the St Mary’s Catholic Church. The packets were then taken to the workers’ accommodations by some church parishioners. The items include rice, flour, sugar, salt, pulses, milk, biscuits, toiletries (shaving kit, cream, soaps) and telecom cards. The church staff checked the nationalities and number of workers living in each room and accordingly distributed the different kinds of food materials.

Rev Lennie said: “We are always on a lookout to help the needy and this came during the auspicious time of Lent – which can be called as Ramadan of Christians as we fast during the 40 days of Lent and give a lot of charity. The church has a Good Samaritan fund, where church members contribute regularly for charity, which is now being used to prepare the 1,300 food packets for the workers.”

Speaking to Khaleej Times, a Dubai based news website, one of the workers (who did not want to be identified) said: “We are begging and living on other people’s benevolence. We have no food to eat. Some of us work outside illegally so they can buy food. There is a restaurant nearby, who has been kind enough to feed some of us on credit. But how long can we survive like this?”

Another worker said he has not seen his family for over four years and has no savings to take back home as the company has refused to give the end-of-service benefits or pending salaries.

“My daughter was engaged to get married but since I couldn’t make arrangements, it was called off. I am waiting to hear from the company as they have asked us to wait but it has already been 10 months. We don’t want to leave without salaries. The company said all they can give is one-way tickets to leave the UAE and that they did not have the funds to pay us.”