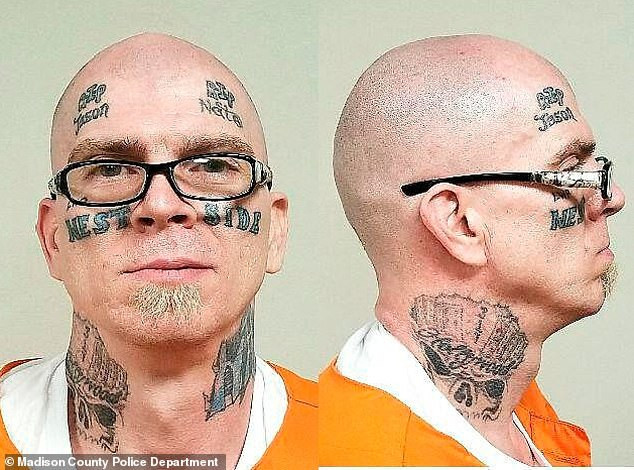 An Indiana prison inmate who is a convicted killer and already serving two life sentences has asked a judge to give him the death penalty or he will kill again after stabbing a fellow inmate to death.

Tommy P. Holland, 45, of Indianapolis was charged with murder for stabbing Clifford Baggett, 28, to death at the Pendleton Correctional Facility on August 9, 2019.

Holland, who is behind bars for the 2015 slayings of employees at a Mars Hill supermarket and a Marathon gas station, allegedly stabbed Baggett 10 times including in the arm, chest, and buttocks in the attack.

He appeared in Madison Circuit Court this week where he rejected a deal in which he would have pleaded guilty and received a third sentence of life without the possibility of parole. Instead, he vowed to kill again if he’s not given a death penalty.

‘I will continue to drop bodies until you give me the death penalty,’ Holland told the court, according to Madison County prosecutor Rodney Cummings.

Holland’s attorney Bryan Williams confirmed Holland made the request to the court against his advice and said he believes his client is ‘serious’ about his request.

‘In 27 years as a defense attorney I’ve never had that happen before,’ he said. ‘Without question, he was serious about the request.’

Judge Andrew Hopper said he would consider Holland’s request for the death penalty but is reluctant to pursue it because he doesn’t want to waste taxpayer money.

‘It’s not an appropriate way to spend taxpayer dollars.’

Cummings said Holland will be segregated from other inmates for another year before being returned to the general population.

“I have contacted the prosecutor in LaPorte County of a potential problem and am writing to the Department of Correction for them to exercise reasonable caution to prevent his (Holland) access to other inmates, nurses, and correctional officers,” Cummings said.