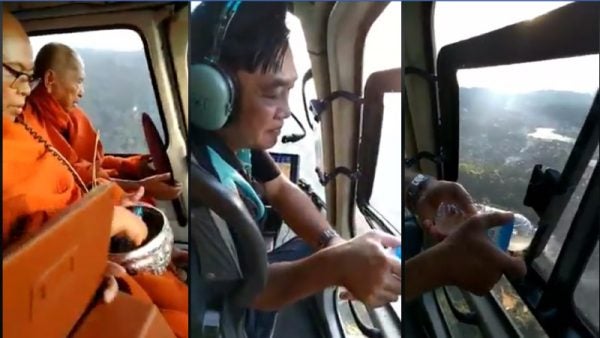 Buddhist monks in Myanmar have reportedly taken to the skies to spray Holy Water to protect the country from the deadly coronavirus.

Led by the revered Bhamo Sayadaw, the Chairman of State Sangha Mahanayaka Committee, Burmese monks are flown by helicopter over the Golden Land to protect their people from the deadly Coronavirus, COVID-19.

They can be seen chanting protective verses and sprinkling water laced with chantings across the cities of the Asian country as they were flown in the helicopter.

Although the country has a border with China, which spread across 1400 miles, they are yet to record a single case of the virus within their border.

In China, more than 80,800 people have been infected, but according to Aung San Suu Kyi, Myanmar’s civilian leader, the country has not yet seen a single confirmed case.

“Until now, no one in our country is infected with Covid-19,” said the country’s civilian leader, Aung San Suu Kyi, in a televised address on Monday.

To the country’s west, 114 coronavirus cases have been confirmed in India and five in Bangladesh. Myanmar’s southern neighbour, Thailand, has reported 114 cases.

Attempting to explain the anomaly, a spokesperson for Myanmar’s government has claimed that people’s “lifestyle and diet” protected them from the disease – stoking concerns the country is downplaying the impact of the respiratory illness, The Guardian reports.

Zaw Htay, a government spokesperson, also said the common use of cash instead of credit cards, helped curb the spread of the illness. There is no evidence to show that diet or banknotes can stop the spread of coronavirus.

“Such irresponsible statements clash with everything known about the coronavirus outbreak, defy reality, and only serve to give a false sense of security to the country’s people about the disease and their risks of infection,” said Phil Robertson, deputy director of the Asia division at Human Rights Watch, in a blog post.

Even without any reported cases, the government has banned festivals and entertainment events in April, including the Thingyan festival, the biggest annual holiday in the country.

The government has also started a fund to raise money from the public to support its response to the illness.

“I urge those of you who would like to donate to give as much as you can,” said Aung San Suu Kyi.