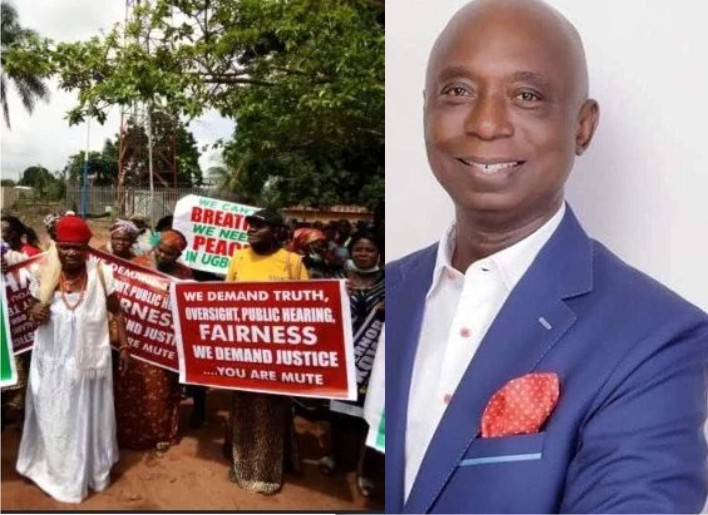 The former Federal lawmaker was accused of tormenting indigenes and incarcerating their husbands, relatives and sons.

Nwoko is being accused of forcefully taking over several hectares of land belonging to members of the community.

The protesting women of various ages under the umbrella of Concerned Women of Idumuje-Ugboko, were armed with placards bearing different inscriptions while storming the Delta State Government House, Asaba, the capital, to register their grievances.

The women, who accused Nwoko of promoting the insecurity in the town, disclosed that their husbands, sons and relatives were being incarcerated in Abuja on the orders of the Nigerian billionaire.

The protesting women also accused the local government council chairman of working for Nwoko by “legitimising illegality through issuance of customary rights of occupancy on lands under customary dispute and legal litigation”.

In a petition to Governor Ifeanyi Okowa, women of the community alleged that Nwoko forcefully dispossessed farmers of their ancestral land for private commercial ventures.

“We consider it in the worst interest of the state and humanity to destroy food and cash crop farms and replace them with a golf course while leaving the owners with no alternative but a transition from being landlords to at best, tenants.”

The women wondered why the Governor Okowa-led government had not deemed it fit to present a staff of office to the traditional ruler, Obi Chukwunomso Nwoko, three years after he was traditionally installed after all necessary tradition and customs had been followed.