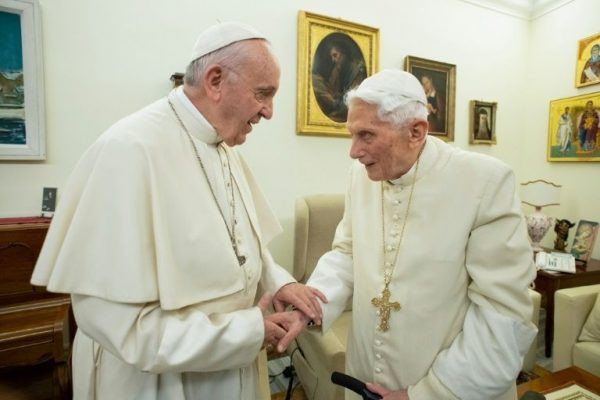 Retired Pope Benedict XVI has defended the celibacy of Catholic Priests after his successor, Pope Francis hinted on relaxing the ban on married men serving as priests.

Pope Benedict in a book titled “From the Depths of Our Hearts: Priesthood, Celibacy and the Crisis of the Catholic Church” which he co-authored with fellow conservative, Guinean Cardinal Robert Sarah who heads the Vatican’s liturgy office and has been a quiet critic of Francis, said he could not remain silent on the issue because the centuries-old tradition within the Church has “great significance” because it allows priests to focus on their duties.

Sticking to his theological form, Benedict’s chapter is dense with biblical references and he explains in scholarly terms what he says is the “necessary” foundation for the celibate priesthood that dates from the times of the apostles.

“The priesthood of Jesus Christ causes us to enter into a life that consists of becoming one with him and renouncing all that belongs only to us.

“For priests, this is the foundation of the necessity of celibacy but also of liturgical prayer, meditation on the Word of God and the renunciation of material goods.

“Since serving the Lord likewise requires the total gift of a man, it does not seem possible to carry on the two vocations simultaneously. Thus, the ability to renounce marriage so as to place oneself totally at the Lord’s disposition became a criterion for priestly ministry.”

The retired Pope also acknowledged that the Catholic priesthood has been “wounded by the revelation of so many scandals, disconcerted by the constant questioning of their consecrated celibacy.”

In the book dedicated to priests of the world, the two authors however urged them to persevere as they also admonished Catholic faithfuls to hold firm and support them in their celibate ministry.

“It is urgent and necessary for everyone—bishops, priests and lay people—to stop letting themselves be intimidated by the wrong-headed pleas, the theatrical productions, the diabolical lies and the fashionable errors that try to put down priestly celibacy.

“It is urgent and necessary for everyone—bishops, priests and lay people—to take a fresh look with the eyes of faith at the Church and at priestly celibacy which protects her mystery.”

Benedict’s intervention has been considered as extraordinary, given that he promised to remain “hidden from the world” when he retired in 2013 after becoming the first pontiff to resign in almost 600 years.

Some Vatican commentators have also expressed their surprise over Benedict’s intervention. Massimo Faggioli, a historian and theologian at Villanova University tweeted;

“Benedict XVI is really not breaking his silence because he (and his entourage) never felt bound to that promise. But this is a serious breach”

The book which is still being published, has already reignited speculation about the nature of the relationship between Francis and Benedict.