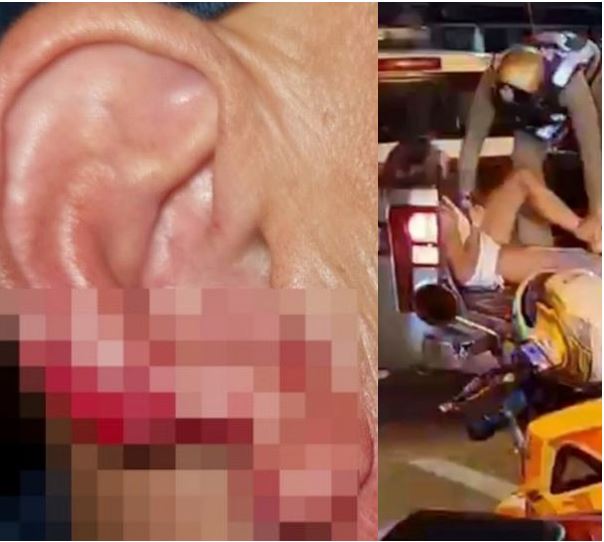 A drunk Thai sex worker has been arrested for biting off and swallowing parts of the right earlobe of a tourist.

The 25-year-old Kannika Kamton reportedly approached the 55-year-old tourist after hopping onto an open-back bus in Thailand while “severely intoxicated from alcohol”.

She boarded the vehicle after it stopped at a traffic light in Pattaya before launching her attack on the tourist who was in the bus.

The sex worker allegedly sunk her teeth into the man’s right ear lobe as passengers watched on in horror on Saturday night, August 20. As the victim screamed in agony, Kamton swallowed the chunk of flesh she bit off.

Kamton tried to run off before police were called. She was thereafter seized by cops after being handcuffed to a truck. She was then taken to the local police station to sober up.

Officers bandaged up the holidaymaker’s ear while he was “bleeding heavily” on the side of a busy road, before he was taken to a hospital for emergency treatment.

Police Lieutenant Colonel Saijai Kamchula said: “An officer took control of the attacker, but she kicked the officer with her feet and resisted arrest, so extra help was needed to restrain her.

“The detained woman will be prosecuted. There were many witnesses and the victim wants to have the woman detained and prosecuted.”

It is not clear yet why Kamton attacked the man.