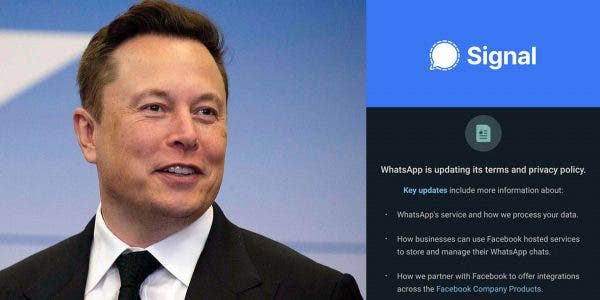 The current World’s Richest Man, Elon Musk has urged people to use the Signal messaging app after WhatsApp notified users they will have to agree to controversial new terms and conditions.

The tweet was then retweeted by Twitter CEO Jack Dorsey. Shortly after, Signal tweeted that it was working to handle the surge of new users.

The Facebook-owned app will force all users to agree to the new policy by 8 February or else lose access to their messages and contacts.

The new terms will mean that private data collected by WhatsApp, including a user’s IP address and phone number, will be shared with Facebook.

The technology billionaire, who overtook Amazon CEO Jeff Bezos to become the richest person in the world on Thursday, also shared a meme highlighting Facebook’s perceived attitude towards user privacy.

This isn’t the first time Musk has publicly sparred with Facebook over privacy concerns. In 2018, he not only had his own personal Facebook page removed, but that of his companies Tesla and SpaceX. His take on the long-fought battle between Signal and WhatsApp isn’t off-base, though.

Signal is a typical one-tap install app that can be found in your normal marketplaces like Google’s Play Store and Apple’s App Store, and works just like the usual text messaging app. It’s an open source development provided free of charge by the non-profit Signal Foundation