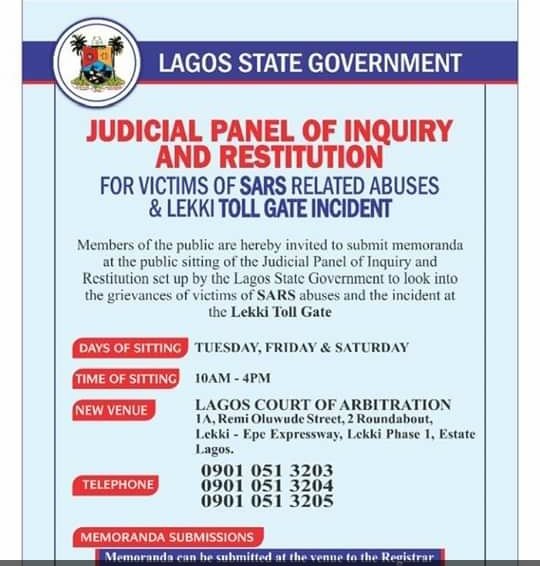 An oath of secrecy issued to Lagos State youth representatives by the state government on the newly set up panel probing the disbanded Special Anti-Robbery Squad, SARS, has been leaked to the public domain.

On October 15, the Lagos State Governor set up Judicial Panel of Enquiry and Restitution to ensure officers of the Nigeria Police Force guilty of brutality are made to face the law.

The two representatives selected by the youths, Rinu Oduala and Temitope Majekodunmi joined Panel and was sworn-in today, October 27.

Before their swearing in, however, it was revealed that the youths rejected the Oath of Secrecy which would have ensured they are gagged and prevented from sharing with the public information regarding the panel.

The youths insisted that the panel is public panel, hence, its hearings must be made public.

The panel was forced to withdraw the outrageous oath before swearing in the youth reps.

Giving update on the swearing and signing of the oath, Moe Odele, an EndSARS advocate and co-founder of the Feminist Coalition said on Twitter; “This has been rejected after concerns were raised and a dialogue was held this morning. The panellists will not be signing this document,”

See photos from the swearing in that held today.

President of the Nigeria Bar Association (NBA), Olumide Apata, journalists, observers, among others were at the venue of the first sitting.

Oduala, Majekodunmi and other panel members are tasked with listening to the submissions of SARS survivors, interrogating the accused personnel, and determining the veracity of all claims.

The panel will sit on Tuesdays, Fridays and Saturdays from 10 am to 4 pm at the Lagos Court of Arbitration at Remi Olowude Street, in Lekki.