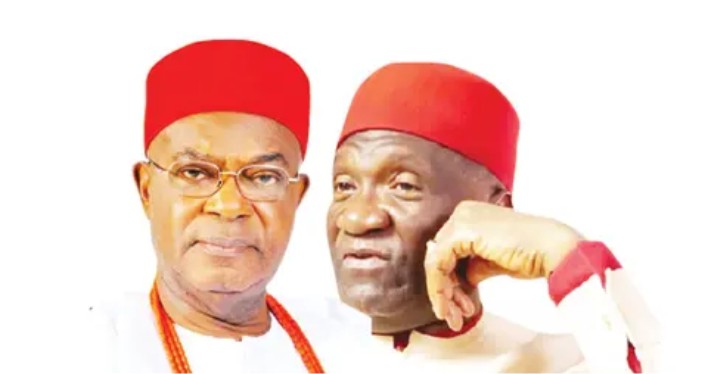 Before the judgment, it was almost like an abomination, to say the least, for a typical Igbo father to bequeath an estate to his female child. This practice necessitated the saying, ‘Nwanyi bu ama onye ozo’ (a girl child belongs to another family).

What did the Supreme Court say? The apex court in what has been described as a landmark decision, upheld the right of a female child to inherit the property of her father in a unanimous decision. By that judgment, the court voided the age-long Igbo tradition and customary law, which forbade a female child from inheriting her father’s estate.

The Supreme Court voided the tradition and custom on the grounds that it was discriminatory and conflicted with the provision of the Constitution of the Federal Republic of Nigeria.

The court specifically held that the practice conflicted with Section 42(1) (a) and (2) of the 1999 Constitution.

The judgment was given in an appeal marked: SC.224/2004 filed by Mrs Lois Chituru Ukeje, wife of the late Lazarus Ogbonna Ukeje, and their son, Enyinnaya Lazarus Ukeje, against Ms Gladys Ada Ukeje, who is the deceased’s daughter.

Gladys had sued the deceased’s wife and son before the Lagos High Court, claiming to be one of the deceased’s children and sought to be included among those to administer the deceased father’s estate.

The trial court found that she was a daughter to the deceased and that she was qualified to benefit from the estate of her father, who died intestate (without a will) in Lagos in 1981.

The Court of Appeal, Lagos, to which Lois and Enyinnaya appealed, upheld the decision of the trial court, prompting them to appeal to the Supreme Court.

In its judgment, the Supreme Court held that the Court of Appeal, Lagos, was right to have voided the Igbo native law and custom that disinherit female children. Justice Bode Rhodes-Vivour, who read the lead judgment, held that: “No matter the circumstances of the birth of a female child, such a child is entitled to an inheritance from her late father’s estate.”

Justice Rhodes-Vivour added, “The Igbo customary law, which disentitles a female child from partaking in the sharing of her deceased father’s estate is a breach of Section 42(1) and (2) of the Constitution, a fundamental rights provision guaranteed to every Nigerian.

“The said discriminatory customary law is void as it conflicts with Section 42 (1) and (2) of the Constitution. In the light of all that I have been saying, the appeal is dismissed. In the spirit of reconciliation, parties are to bear their own costs.”

The judgment has evoked mixed reactions from custodians of Igbo culture, lawyers and commentators.

Victor Ononye, a public affairs commentator said, “That judgment will haunt those who delivered it, because what goes around comes around. You do not give a judgment that not only negates the tenets of age-long tradition and culture and foists disharmony on families, where women scorn and wantonly abandon marriages and return home to cause trouble with their male siblings.

“Those judges merely countered natural justice. Right from the time of Adam and the Biblical time, men were established as heads of families and I hope those judges have families. The judgment was more of an academic exercise that conflicts with tradition and culture.

“They have created another round of trouble. By the way, in Igboland, few women, who do not marry, always have a place to stay. The courts should be mindful not to set fire on families. They should also deliver judgments that can stand the test of time.

For Uche Okafor, a lawyer, the judgment will need distinction or review.

He said, “The Supreme Court judgment needs judicial interpretation/review. The judgment was about an unmarried daughter of a deceased man, who was denied her father’s hereditament. If the woman was married, would the Supreme Court have given the same opinion? Would that not amount to equity aiding double plates for a married woman to get shares from her matrimonial home as well as from her maiden home? I think the judgment needs to be distinguished.”

But Chief Akunwebe Emechebe, an Igbo culture enthusiast, disagreed with the lawyer.

He said the judgment should apply to both married and unmarried daughters of a man.

Emechebe stated, “The court interpreted and applied the law as it is. Our laws – the constitution, the statutes and the international conventions – frown on discrimination against persons on the grounds of sex and not on the grounds of the marital status of a person.

“Unless and until these laws are amended to bring the aspect of married or unmarried in the laws, the position of the laws as it is today is the position taken by the Supreme Court.

“The courts are not interested in whether the female in question is married, unmarried, remarried, divorced, etc in their decisions.”

He said female children were not second class citizens and should not be treated like one.

The cleric stated, “Female children should be accorded the same rights given their male counterparts and therefore should not be discriminated against.

“Families should put the judgment in practice and female children should stand up and claim their rights. It is not only Supreme Court judgment, but a God-given right and they should claim that right.”

Ngozika Iheagwam, a housewife saw the judgment as an unwanted reversal of a people’s culture and opined that the ruling would cause chaos in many Igbo societies.

She said, “What concerns the Supreme Court with the Igbo culture?  Every woman should look forward to getting married and settling down in her matrimonial home.

“Why should she start going back to her father’s home to start fighting over property with her male siblings? That judgment will manifest absurdity in Igboland. I don’t support it.”

The President, Ohanaeze in Anambra State, Chief Damian Okeke-Ogene, said bequeathing property to a man’s daughter was not alien to Ndigbo, and as such, the Supreme Court judgment should not be seen as strange or a surprise to Igbo people.

He said, “Most fathers buy cars, build houses and so on for their daughters upon marriage. So, it’s wrong to say that the Igbo don’t give their daughters their property.

“If a daughter is not married or is divorced, our custom and tradition require the father to provide accommodation for her in his house. If a man has a commercial property, say a house, he can give a part of it to his daughter to manage and earn money from it accordingly. All these are done in Igboland. So, it’s wrong to say that a girl child in Igboland is disinherited from her father’s property.

“But I must say that not everything can be shared between the male and female children of a man.

“Ancestral property is exclusive to male children of a man and our daughters know that very well.”

He added that it would be an absurdity and even an abomination for a man to bequeath such ancestral property to his daughters.

“Who will ever think of a man to give his Obi (ancestral home/house) to a daughter, who may be married to an Ibadan man in the name of equity or law? That’s unthinkable. Therefore, the Supreme Court judgment has limitations or exclusions like any other law, but it is not totally strange to us, the Igbo,” Okeke-Ogene stated.

For the traditional ruler of Nawfia and Umunri, Igwe Chijioke Nwankwo, the Supreme Court judgment could be enforced but would be difficult to implement in most Igbo communities.

According to him upon marriage, daughters are settled by their parents, who give them certain shares of the family property, a privilege he said male children do not enjoy during their marriage.

“Certain property, particularly land, in Igboland belongs to the living, the dead and those yet to be born.  So, you don’t give such out to a female child, who may have a bad marriage and such property will be lost forever.

“Some revert to the families upon the death of the beneficiary; that is why the Igbo don’t give such property to women, who may even transfer the land to philanderers.”

Only time will tell how the judgment will fare in the Igbo society.