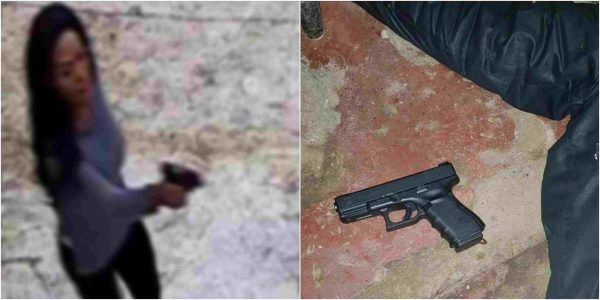 Police in Anambra were engaged in a gun battle by two suspected female robbers in Ogidi, Idemili North local government area of the state. The incident took place for over 30 minutes on Saturday, December 15, Punch reports.

Legit.ng reported that the police had arrived, following a tip-off that the robbers were operating in the hotel. A source in the hotel reportedly stated: “On sighting the police, the robbers locked the entrance of the hotel and engaged the police in a fierce gun duel, which lasted for more than 30 minutes. “One of the suspects later sustained gunshot injury on the buttocks, while attempting to disarm a policeman. The lady is currently receiving treatment in a hospital.” The report was confirmed by the state’s police public relation’s officer, Haruna Mohammed, who said the suspects were arrested while their accomplices escaped.

The PRO further disclosed that one fabricated pistol, three live cartridges, one axe, two empty shells, some quantities of dry leaves suspected to be Indian hemp and Tramadol were recovered from the suspects. He said: “At about 4pm on Saturday, we received an intelligence report at the Ogidi Police Division that some suspected armed robbers/cultists were cited at the Paradise Hotel, Ogidi, brandishing dangerous weapons. “Following the report, police detectives attached to the Ogidi Division rushed to the scene and cordoned off the area. “The gang, on sighting the police, locked the entrance to the hotel and engaged the police in a fierce gun duel, which lasted for more than 30 minutes. The police responded, but with high restraint in order to avert innocent civilian casualties. “As a result, one of the suspects, Ugochukwu Okafor, sustained gunshot injuries on the buttocks, while trying to disarm a police officer.” He said the injured suspect was taken to the hospital for treatment, and that the case is currently being investigated. The suspects will be charged to court afterwards.