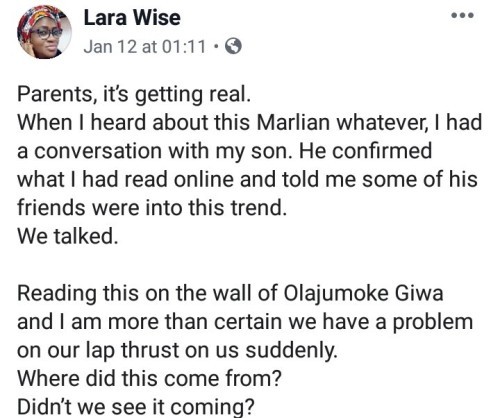 A parent has raised alarm after her daughter and many other female students were suspended for forming a Marlian cult in school.

According to the parent, her daughter was caught with her underwear in her school bag. Upon investigation, it was discovered that she wasn’t wearing any underwear, even though she left home wearing pants. When asked, she confessed to being a member of a Marlian cult in school.

She further revealed that part of their cult’s rules is to go pantless on Mondays, Wednesdays, and Fridays.

After being punished, the student named other students who belong to the cult and they were all suspended. Another sad thing was the she is the daughter of a deaconess and an elder in church.

Read the story below as shared by Facebook users.