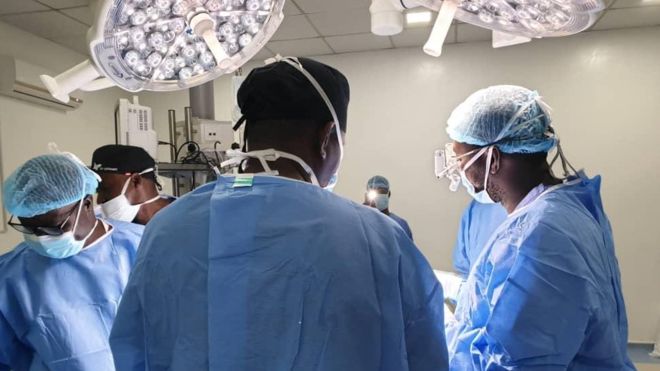 The Jos University Teaching Hospital (JUTH), at the weekend undertook its first surgery to remove brain tumor using a machine that drills the skull bone to gain access to the tumor.

“It is the first Trans-labyrinthine approach to a posterior fossa tumor. We used the C-Arm machine to drill the skull bone so as to see what is behind even while facing the front of the head.

“In the past, we had to open the brain which was always risky and led to deaths because the brain is delicate,’’ Dr Origoya Peter Binitie, the lead neurosurgeon in the operation, told the News Agency of Nigeria in Jos.

He said that the tumor had been in the woman for three years before the surgery.

“Half of her face was affected and she could not hear with the ear affected,’’ he explained, adding that the operation was a combined effort by neurosurgeons, Ear-Nose-Throats (ENT), surgeons and the Anaesthetists.

Binitie, who described tumor as an abnormal growth of tissue largely outside the brain stem, said that the new approach helps the surgeons to navigate around the head to see all sides at the same time.

“In the past, we used X-rays to ascertain the position of every part of the head; that involved moving the X-ray machine up and down to, and from, the theatre.

“That process usually takes a longer time and will not give us the position of a bone or the tissue in real time. But with the new machine, it is very quick and saves more than two hours.

Binitie, first neurosurgeon in northern Nigeria, who had been in service since 1974, said that the cost of such operation was “around N300,000 in JUTH’’.

“But it costs several millions of naira in other hospitals and even more when done outside Nigeria,’’ he said.