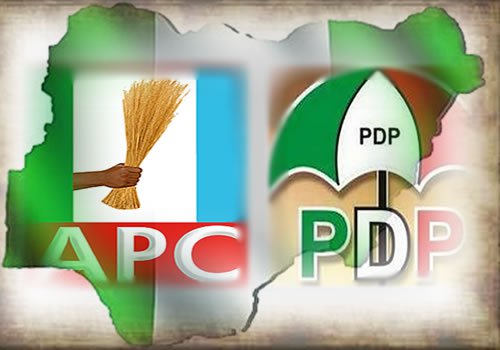 The back and forth traveling of Politicians at this period from on political part to another has once again occurred. This time, it is Ekiti state where for PDP members who were government appointees under the former PDP Governor, Ayodele Fayose have left the umbrella party to join their broom counterpart.

The defectors, numbering 500 were the serving and former local government elected and appointed political officials of the former governor between 2003 -2007 and 2014-2018.

The Speaker of the State House of Assembly, Hon Adeniran Alagbada received them on behalf of the party. The defectors promised to work assiduously for the triumph of President Muhammadu Buhari in the 2019 presidential poll as well as working for the successes of other APC candidates for the state and federal legislative elections.

Speaking at the event, Alagbada who decamped to APC prior to the July 14 governorship election, assured that the defectors will be treated with respect in the new party.

He said the APC operates an open door policy, which places equality in ranks and opportunities between the old and new members.

The Speaker added that all their outstanding severance allowances since 2003 will be paid in line with the promise made by Governor Fayemi. He said this was part of the reasons for the defection.

“I have spoken with Governor Fayemi, he had assured me that he will put smile on your faces. You struggled hard under the PDP led government of Governor Fayose but nothing was done.

“But we have a governor Fayemi who is responsive and responsible, he has listened to your plight and he was ready to fight for you. He is ready to pay your allowances in spite of the fact that you are
members of opposition.

“When I met the governor, he told me that whether you defect or not that he would pay and that he had instructed the council bosses to begin the processes that would fasttrack the payment.

“Your defecting to APC only connotes that you believe in what Governor Fayemi has been doing. Within two weeks he assumed office, the governor abrogated the taxes being paid in state public and private primary and secondary schools and declared full free education up to secondary level.

“This is the kind of governor we must be electing in Ekiti. A governor that knows how to empower his people , not the one that would pauperise and enslave them the way Fayose did”, he said.