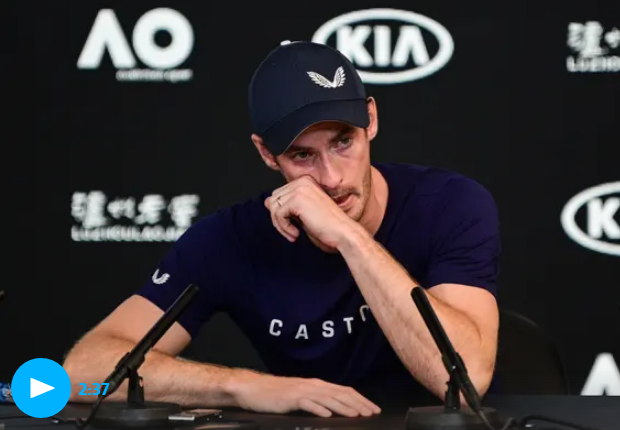 Andy Murray shocked the tennis world Friday morning in Melbourne when he announced his plans to retire this year during a tearful press conference ahead of the Australian Open. The former world No. 1 had hip surgery in January 2017 and says the pain has become too much to bear. If his body holds up in the coming months, he hopes to play Wimbledon this summer and then retire.

Murray will finish his career with at least $165 million in career earnings, including his current prize money tally of $61 million and just over $100 million in earnings from endorsements, bonuses and appearance fees.

Murray has won 45 career titles, including three Grand Slam events and two Olympic singles gold medals. He is the only tennis player, male or female, to win a pair of Olympic titles.

His career prize money ranks fourth all time, but it is the three players ahead of him who kept Murray from reaching greater heights on and off the court. Roger Federer, Novak Djokovic and Rafael Nadal have won a combined $350 million in career prize money and 51 singles Grand Slam titles.

The last dozen years or so have been called the Golden Era of men’s tennis largely for the exploits of Federer, Djokovic and Nadal. But five years ago, Murray was part of the conversation with the “Big Four” dominating the sport. Murray won Slam titles in 2012 and 2013 and appeared in five Australian Open finals over the course of seven years. Yet, the other three continued to dominate, while injuries and poor play pushed Murray’s current rank to No. 230.

The Scottish-born Murray is a legend in the U.K.. He was the first Brit since 1936 to win the All-England title in 2013 (he added a second Wimbledon win in 2016). He led the country to its first Davis Cup victory in 79 years in 2015, and he has his two Olympic golds.

The royalty status in one of tennis’ biggest markets boosted his appearance and exhibition fees, as well as his endorsement portfolio, which currently includes Under Armour, Head and Jaguar.

In recent years, Murray has eschewed the traditional endorsement deals and focused on his investments in start-ups, largely through the crowdfunding platform Seedrs in which Murray also owns a stake. Last year he invested in Deuce, a new start-up app aimed to make tennis more accessible and affordable.

Murray’s peak earnings year was 2016 when he won nine titles, including Wimbledon. He led the ATP in prize money with $16.3 million. He finished a career-high of No. 40 in 2017 in Forbes‘ annual look at the world’s highest-paid athletes with earnings of $28.8 million, including endorsements and appearances, between June 2016 and June 2017.

Murray is scheduled to start play at the Australian Open on Monday against No. 22 Roberto Bautista Agut. He admitted during Friday’s press conference that this tournament could be his last.

“There’s a chance of that for sure,” he said. “I have an option to have another operation, which is a little more severe than what I’ve had before and having my hip resurfaced, which would allow me to have a better quality of life and be out of pain. That’s something I’m seriously considering right now.”