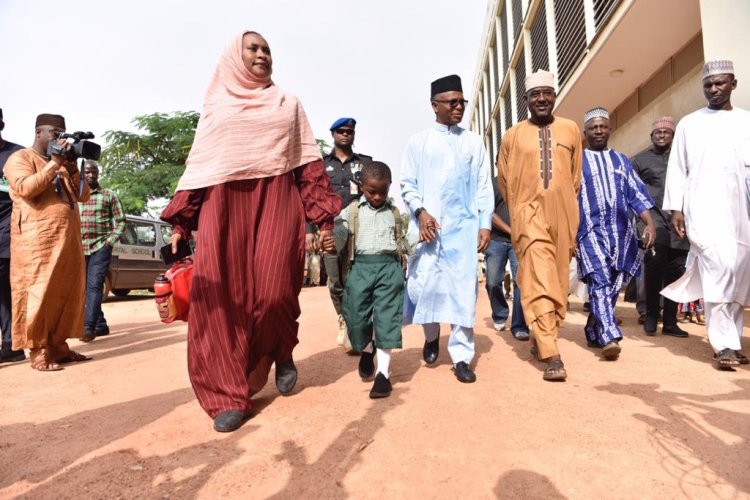 The governor’s son, Abubakar Al-Sadiq El-Rufai was enrolled by his father into primary one in Capital School Malali, Kaduna.

After the registration process was completed at the school principal’s office,  El-Rufai told journalists that the decision is in fulfillment of his campaign promise to improve the quality of public education in Kaduna State.

“The move is part of reforms to revamp public schools in the state to make them more competitive.

“We are determined to fix public education and raise their standards so that private education will become only a luxury.

“I went to a public school like this, in fact, the school I went to was not even as good as this but here I am because of the quality of the teaching I got.

“It is our intention in Kaduna State government to ensure that all our public schools offer quality education and we are encouraging all our senior public servants to have their children in public schools,” El-Rufai said.

Accompanied by his wife, Ummi, El-Rufai noted that it is only when political leaders send their children to public schools that they will be forced to pay attention to the quality of public education in the country.

He, however, stresses that the law does not allow him to force anyone to embrace the policy.

The governor’s wife, Ummi expressed mixed feelings about taking her child to a public school.

She also agreed that her husband’s action is the only way leaders can live by example and ensure that public institutions are given proper attention.

The governor’s son, on his part,  expressed happiness to assist his father to fulfill his campaign promise.

El-Rufa’i had in a state broadcast in December 2017, promised to enroll his child in a public school when he turns six years.