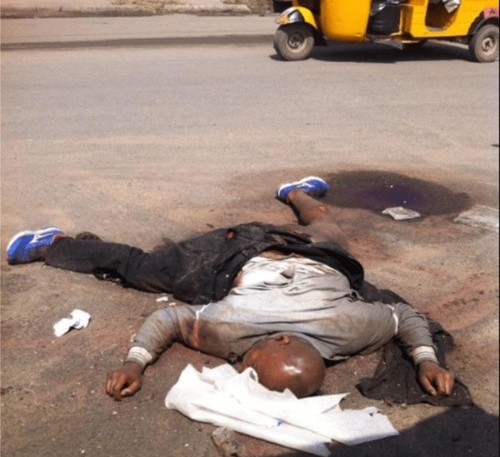 The lifeless body of a middle aged man was seen lying at Bata junction off factory road, along Aba-Owerri road in the early hours of Tuesday, with his private part cut off.

The body was lying with legs spread apart and bloodied human organs can be seen in the middle of his legs. His penis had been cut off. He was also bruised in his inner thigh, as though he had been burnt with an iron.

A source who spoke to newsmen on the condition of anonymity disclosed that the private part of a middle aged man was cut off by his assailants, adding that a part of his body that looks like his balls was found right beside him.

The source further expressed dissatisfaction over the incident, wondering why a team of the Nigerian security personnel who are just few meters away from the scene could not arrest the perpetrators of the heinous crime.

It was gathered that there has also been a heightened insecurity in recent times in Aba and Umuahia towns of Abia State. Consequently, the state governor, Dr. Okezie Ikpeazu had ordered the immediate closure of some brothels in Umuahia, suspected to be hideouts for criminal gangs terrorizing residents of the capital city.

As at the time of filing this report, PPRO Abia State Command, Geoffrey Ogbonna is yet to speak on the matter.