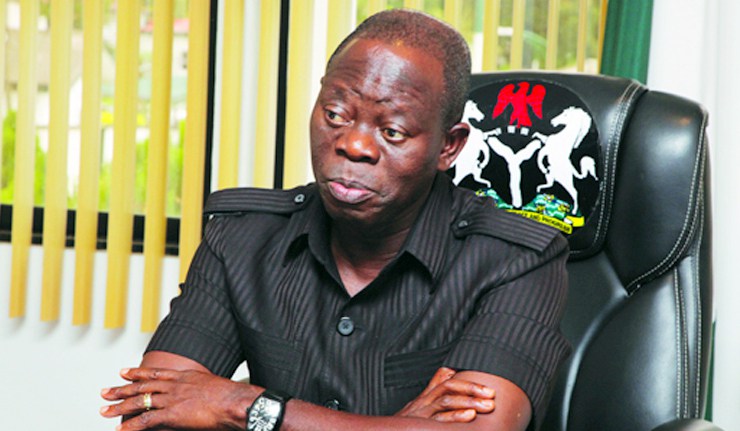 Professor of Law, Nnamdi Obiaraeri has come really hard on the National Chairman of APC, Comr. Adams Oshiomole and the Caretaker committee set up in Imo state for setting up a Disciplinary Committee which supposedly suspended Governor Rochas Okorocha and other APC national assembly flagbearers in Imo State.

Prof Obiaraeri said that Caretaker Committee was illegal and the action taken by what he called a “Kangaroo” Disciplinary Committee was dead on arrival which was why INEC ignored them and went ahead to publish the names of Rochas Okorocha and others as duly nominated candidates of APC after their supposed suspension.

Read in full what he wrote below:

It is a well known legal aphorism that you cannot put something on nothing and expect it to stand but APC National seems hell bent on doing the legally impossible in its Imo State Chapter.

Sadly, this has led to heavy casualties in the electoral fortunes of the party with the dreary prospect that APC may not field candidates in the around the corner general elections in Zamfara, Rivers, Osun and even Enugu States.

The foundation of any democratic enterprise is obedience to rule of law and robust party politics revolves around obedience to party constitution but these ideals📌 sound strange or alien to the APC National Chairman.

Needless to say that the numb and impolitic leadership style of Adams Oshiomole has taken a great toll on the membership of the otherwise flourishing party in government .

Contrary to the express provisions of APC Constitution plus a valid and subsisting judgement (including order of perpetual injunction) of the Federal High Court Abuja recognising the Hon Chief Dan Nwafor led Imo APC Executive as the authentic officers of APC down to the Local Government and ward levels, the hard nosed Adams Oshiomole unilaterally purported to dissolve the elected Imo Exco and appointed a Chief Marcon Nlemigbo “Caretaker Committee”.

In the eyes of the law, this dissolution of a democratically elected Imo APC Executive and the subsequent composition of an undemocratic “Caretaker Committee” is illegal, null, void and of no effect.

To add salt to injury, and as practical demonstration of the continuing drama of the absurd, the said Chief Marcon Nlemigbo led “Caretaker Committee” composed a Kangaroo “Disciplinary Committee” which allegedly tried in absentia some duly nominated APC National Assembly candidates in the next month’s election and purportedly “suspended” these candidates from the party.

What a charade or huge joke taken too far.

📌Who gifts away six or seven national assembly positions out of thirteen (three Senate and ten House of Representatives) to the opposition before balĺots are cast except a man determined to shoot himself on the hip?

Without fear of contradiction, Chief Marcon Nlemigbo ought reasonably to know, at least as a lawyer (although a very new wig), that an illegal action can not give rise to a legal claim.

You can not give what you do not have- nemo dat quod non habet.

Chief Nlemigbo had no powers to convoke a “Disciplinary Committee” as he is merely a pretender to the office of State Chairman of APC and those egging him on are liable to be committed for contempt of court.

Going by the judgement of the Federal High Court, the only valid and subsisting APC Executive in Imo State is that led by Hon Chief Dan Nwafor.

In view of the foregoing, the Caretaker Committee led by Chief Nlemigbo lacks the requisite locus standi to operate as officers of the party not to talk of setting up a “Disciplinary Committee” to try any person or duly nominated candidates of the party in a general election.

Even as this mockery or travesty of a recommendation of suspension is said to have been sent to APC NWC for consideration, the national officers need to be reminded that “ex dolo malo non oritur actio”, meaning that a person who grounds his cause of action on an immoral or an illegal act can never be assisted.

Put succinctly, the Chief Nlemigbo led “Caretaker Committee” is unknown to law and his so called “Disciplinary Committee” is a hogwash, pooh pooh and tommyrot.

Inexorably, his “Disciplinary Commitee” remains a Kangaroo Committee whose mandate or terms of reference arose ex turpi causa📌 or in transgression of a judgement of a Court of Superior Records and positive laws of this country.

If not for purposes of irritation and political jaywalking, that Kangaroo “Disciplinary Committee” ought to know that their assignment was dead on arrival and their purported recommendation of the suspension of duly nominated national assembly candidates is illegal and ultra vires.

It is a complete waste of time and a monumental exercise in futility because going by irrevocable INEC timelines for the 2019 general election, the window for substitution of candidates by political parties has closed and the names of all national assembly candidates eligible to contest the general election published.

So how do you put something on nothing and expect it to stand?

At this stage, only the death of a candidate can remove him or her from the ballot and certainly not the perverse findings of a Kangaroo Disciplinary Committee set up by an otherwise illegal Caretaker Committee.

Nigerians were expecting that after the Adams Oshiomole led NWC auctioned mandates and arbitrarily doled out undemocratic📌 automatic tickets in Imo APC, that the party will deploy strong post-primaries ADR techniques to calm frayed nerves of its members to no avail.

The APC National should immediately retrace its odious missteps and reverse the barage of calculated and premeditated undemocratic onslaughts on Imo APC.

Needless to say that the cocktail of ilegalities already recorded suggest clearly that the APC National does not wish the party well in Imo State but there is still a fighting chance because 24 Hours is a long time in politics.

A word is usually not enough for the unwise.

A new normal is possible!

Prof Obiaraeri is my name, the ☆☆☆☆☆ 5-Star Civilian General etc.