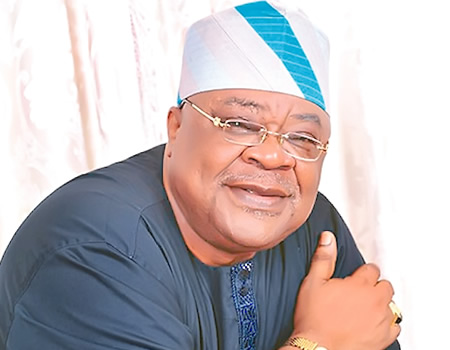 A former governor of Oyo State, Otunba Adebayo Alao-Akala, has been reported dead in the early hours of Wednesday in Igbomoso.

Akala, a chieftain of the All Progressives Congress, APC, was a former governor of the state, between 2007 and 2011.

He was also a deputy governor under former governor, Rashidi Ladoja between 2003 and 2006, when Chief Ladoja was impeached and consequently became the acting governor for eleven months.

An inside source revealed that the late former Alao Akala was discovered dead when they entered his room this morning.

According to the source, the Ogbomoso born retired police officer died in his sleep.

He was said to have returned from Abuja yesterday and held meeting with some people.

Another source in the All Progressives Congress (APC) who confirmed his death to Daily Trust on Wednesday morning said: “It is true that Oga is dead. He died in the early hours of Wednesday in his room in Ogbomoso. He was full of life last night. In fact, I head he was playing with his children before he went to bed. We are in a mourning mood now,” he said.

2. He was a politician and former police officer.

3. He was a former Governor of Oyo State and a candidate of the ADP in the 2019 Governorship election in Oyo State.

5. He proceeded to the Kamina Barracks Middle School, 5th Battalion of Infantry in Tamale, Ghana.

7. He has Diploma in Business Administration in 1998.

9. Alao-Akala was enlisted as Cadet Inspector of Police in June 1974, at the Nigeria Police College, Ikeja.

10. He was recommended for overseas training at the Hendon Police College, in London.

12. From the position of Station Officer in the Nigeria Police, he became the Administrative Officer, Federal Operations at the Force Headquarters, Lagos. He later rose to the position of Operations Officer, FEDOPS, Lagos. He became the Personal Assistant to the Assistant Inspector-General of Police and subsequently the ADC to the Inspector-General of Police.

15. Alao-Akala contested and won the gubernatorial election in 2007 under the platform of the People’s Democratic Party (PDP) and became the Executive Governor of Oyo state, serving a full term till May 2011.

16. In October 2018, he defected to the Action Democratic Party (ADP) where he won the gubernatorial ticket to contest for the office of Governor of Oyo State in the 2019 general elections. After the 23rd February 2019 Presidential and National Assemblies Elections, Akala defected back to the All Progressive Congress, thereby stepping down in the race to become Governor of Oyo State under the platform of the Action Democratic Party.