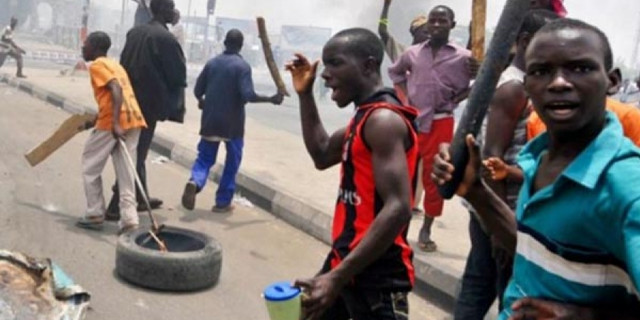 Many are still reacting to the outrageous killing that took place at Odugbeho community in Agatu Local Government Area of Benue state when suspected armed herders stormed a burial ceremony and gunned down no fewer than 27 mourners on Sunday evening, also leaving several others injured.

According to Vanguard, a source in the area said the marauders invaded and surrounded the community at about 6pm when the burial ceremony was on going and opened fire on the mourners.

According to the source, “after surrounding the village they opened fire on the people and especially those who were observing a wake in the burial ceremony and some who were still at a nearby local market because it was a market day.

“They gunned down their victims and butchered those they caught up with. So far almost 30 corpses have been recovered from the scene of the attack, many sustained injury and the search for more corpses is ongoing.

“The casualty figure would have been far more than this but for the ability of some of the youths who were able to put up a fight to repel them.

“During the exchange the herders retreated towards Inahem community heading towards to Gwer West, that is where herdsmen have camped in this part of the state, from where thy launch attacks on our communities,” he said.

State Chairman of Peoples’ Democratic Party, PDP, Sir John Ngbede who is from the community confirmed the attack.

He said, “I got a report from the communities leader that armed herdsmen attacked Odugbeho on Sunday evening and so far 27 corpses have been recovered from the scene of attack. However the Chairman of the Local Government Council has led security personnel to the area for on-the-spot assessment and we are waiting to get update from him.”

When contacted, Chairman of the Agatu Local Government Council, Mr. Suleiman Adoyi who confirmed the attack said 27 corpses had been recovered from the village.

“I am just coming back from Odugbeho and I can confirm that 27 persons were killed and some sustained injuries when herdsmen attacked the community at about 6pm on Sunday.

“I went to the community with security personnel to assess the situation and to get a first hand information about what actually happened.

“Although the place is calm at the moment but the people have fled and deserted their homes. We discovered that they all fled to Ogbawulu community for safety. Though security has been beefed up in the community.

“We are also monitoring the situation and a search is also ongoing in the community for more corpses or survivors of the attack,” the Chairman said.

“Agatu attack is confirmed and the Commissioner of Police has deployed more police officers to manage the incident and forestall further breakdown of law and order. The number of victims is yet to be ascertained as officers are still engaged in stabilizing the area,” she said.