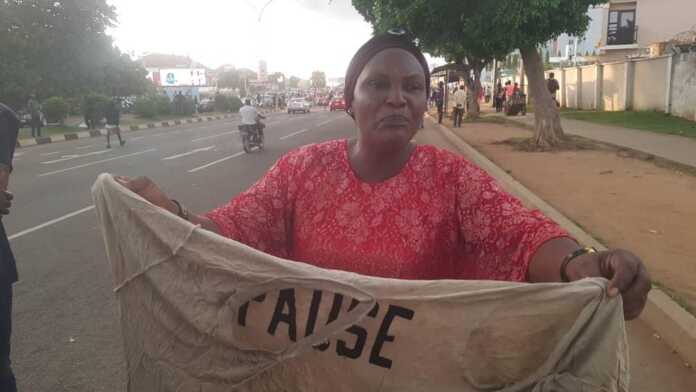 A woman named Victoria Agori, has recounted how the Monitoring team Inspector-General of Police shot her 21-year-old son, Daniel, in her presence before stripping her naked.

The 47-year-old woman who was full of emotions while speaking with Newsmen on Monday in Abuja at the #ENDSARS protest, said she would not forget the tragic incident in a hurry.

The incident happened on May 11, 2019 at 4, Nyege Close, Gbei Road in Nkpolu, Obio/Akpor Local Government Area of Rivers State.

The victim was branded a kidnapper and armed robber by the police before being killed.

She said the policemen stormed their house and arrested her two sons – Daniel and David and a family friend before snuffing life out of the first.

According to her, the law enforcement agents first shot David in the leg and thereafter forced the nozzle of a gun into her private part, which made her to bleed profusely.

She explained further that the policemen invaded their house on the invitation of her first daughter, Blessing, whom she said was dating one of the officers.

She said, “Blessing threatened to kill us. She invited the policemen. They came in two vehicles and shot into the air. One of the bullets bruised David’s lap.

“They used the gun to hit me and Daniel’s girlfriend. They broke all our louvers and took away N200,000 cash from our house. While they were taking us to their base at Aluu, they collected N3,000 from Daniel and used it to buy fuel.

“Two officers forced my legs open and inserted the nozzle of the gun into my private part. I was bleeding even while I was in their office, there was blood everywhere.”

She explained that when she got to their office, the policemen had beaten Daniel with a pestle and shot him in her presence, adding that the police cooked up a lie that Daniel was a kidnapper and armed robber.

“They confirmed to me that my son was dead. My late son was a footballer and was into hairstyling. They claimed they found a gun in one of the rooms but that was a lie. They are only saying that after killing him. The police lied against my son after killing him.”

Since that period, Victoria and the rest of the family are yet to get justice for their loss and the assault on them by the policemen.

According to her, the police authorities have been shielding the perpetrators of that gruesome act from prosecution.