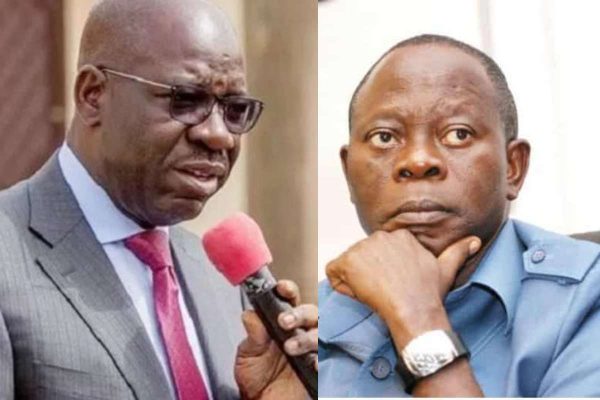 Adam Oshiomhole, former national Chairman of the All Progressives Congress (APC), has vowed to do everything within his power to ensure that Godwin Obaseki is removed from office in the forthcoming governorship election in the State.

Oshiomhole who is Obaseki’s immediate predecessor spoke to a crowd of APC supporters who received him in Edo at the weekend.

According to him, although he threw his weight behind Obaseki, just so in wins in 2016, he has however become a snake , started fighting party members by destroying their properties and arresting them unwarrantedly.

Oshiomhole said he has only come home for a project , he noted that he isn’t going back to Abuja until his work is completed.

“I have come home for only one project. I am not going back to Abuja until the project is completed. I came back home not to rest, but to work,” Oshiomhole said.

“The governor was demolishing the houses of our members while some were being jailed for trump up charges; these are the people who fought for him to become governor.

“I begged those who were being persecuted to take it easy, that they shouldn’t burn the house we all laboured to build because we want to smoke out the snake. Now, the snake has been smoked out of the house.

“A few weeks earlier, the snake said APC was his house and that he was not leaving. Less than 72 hours after saying this, he left.

“If we had burnt the house because the snake was giving us a problem, we would all have been homeless by now,” he added

Earlier, Oshiomhole had explained Why he stopped supporting Obaseki.