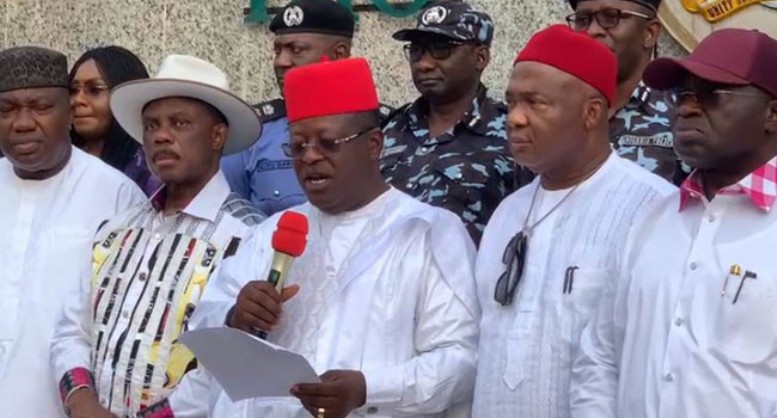 Governors from the South-East geo-political zone of the country has said that Igbos in diaspora are behind the sit-at-home order in the region and not the proscribed Indigenous People of Biafra (IPOB).

The Governors made the claim at the end of their expanded security meeting attended by traditional rulers, national assembly leaders and clergies from the zone on Tuesday October 5.

The South-East leaders reached a resolution of working with security agencies to end the increasing rate of insecurity challenges in the zone, which they said has caused several killings and destruction of properties.

Chairman of the South-East Governors Forum and Ebonyi State governor, Dave Umahi said they made their findings after seeing that the sit-at-home order was still enforced even though IPOB has cancelled it.

The Governors who called on security agencies to ensure a peaceful Anambra governorship election on November 6,  also mandated all clergymen, the Christians Association of Nigeria (CAN), Bishops, Ohanaeze Ndigbo and traditional rulers to continue to dialogue with youths to find lasting solutions to the myriad of challenges in the zone.