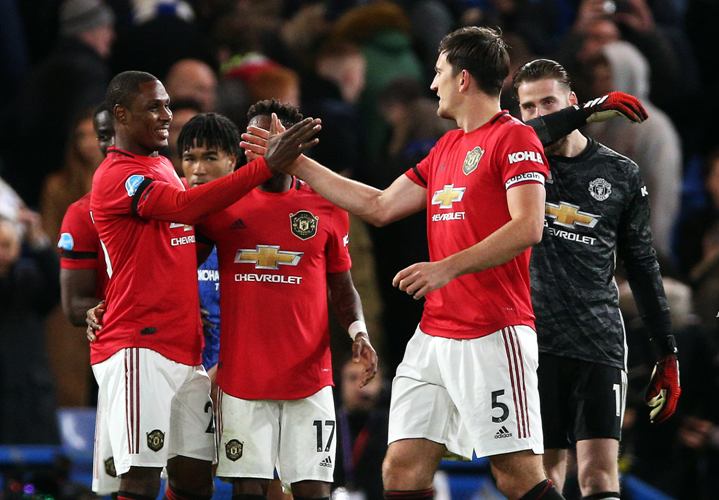 Odion Ighalo has become 200th player and the first Nigerian to make an appearance for Manchester United Premier League Game.

He was a 90-minute substitute in the club’s English Premier League match against Chelsea on Monday night. The game ended 2-0 in favour of Manchester United.

Manchester United recorded the win considered to be controversial after Video Assistant Referee, VAR, ruled out two of Chelsea’s goals.

With the win, United closed in on the Champions League places with victory over Chelsea as Frank Lampard’s side were left with a sense of injustice after contentious VAR decisions went against them.

United closed to within three points of Chelsea in fourth place with headed goals either side of the interval from Anthony Martial and Harry Maguire at Stamford Bridge.

Meanwhile, Ighalo, who wore number 25 jersey played for five minutes, made six touches, one successful drible, one shot on target and his passes were 100 per cent completed.

With his Monday appearance, Ighalo sets the record of being the first Nigerian player to play for United since the creation of the club 142 years ago.

Ighalo had arrived at the Stamford Bridge ahead of the Premier League blockbuster match between the Blues and the Reds about a few hours before the match.

With Marcus Rashford’s absence, a heavy burden would be placed on the deadline-day loan signing Ighalo to in the attacking line.

The Africa Cup of Nations’ highest goalscorer targeted adding to his tally of 16 goals from 55 EPL games in the Manchester United debut.

Earlier, Solskjaer has assured Ighalo that he would be handed a permanent deal should he be able to put up an impressive performance against Chelsea and other games till December end.

Ighalo, who joined United from Shanghai Shenhua, was quarantined before he was allowed to train with his new teammates but the coach believes he deserves a chance in the Monday night’s game, saying, “He (Ighalo) is desperate to play for Manchester United.”

Ighalo has been training with Manchester-based performance coach Wayne Richardson at the GB Taekwondo Centre in Manchester to keep fit despite featuring in his last competitive match in December 2019.

He arrived at Carrington on Sunday morning, chauffeured in, to train with his new teammates for the first time.