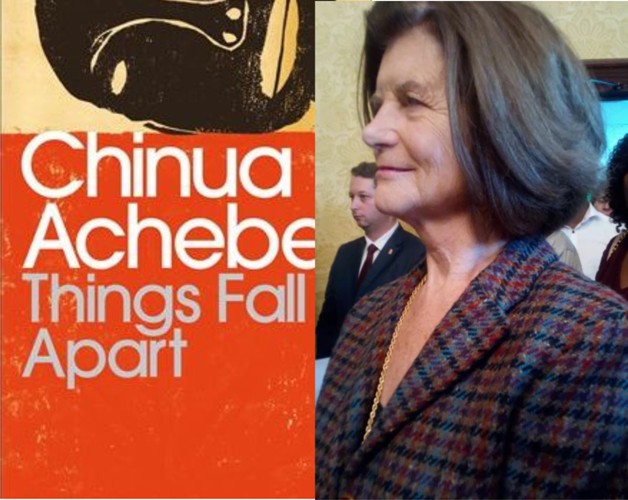 An Irish woman Irene Duffy Lynch who visited Nigeria and read Chinua Achebe’s book, Things Fall Apart, many times wants to translate the novel to her language and make it available in Irish schools.

While Achebe is writing about the arrival of British colonialism and accompanying Christian missions causing chaos in Africa as they come into conflict with traditional Igbo culture and religion, Yeats writes against the cultural as well as political imperialism of the English.

Veteran Nollywood actor who is now based in Dublin, Deji Adenuga noted via his Facebook page that Irish woman, Irene Duffy Lynch, who has been to Nigerian fell in love with Achebe’s Things Fall Apart so much that she was said to have read it over and over and again.

That is not all, Lynch was so impressed with Achebe’s book that she fell in love with it and got inspired to translate Things Fall Apart to Irish language.

Meanwhile, Achebe is the most translated African author as “Things Fall Apart” has been translated into over 50 languages.

The Irish woman hopes to bring Achebe’s Things Fall Apart into schools in Ireland for the enjoyment of the people of Ireland and the Irish people all over the world.