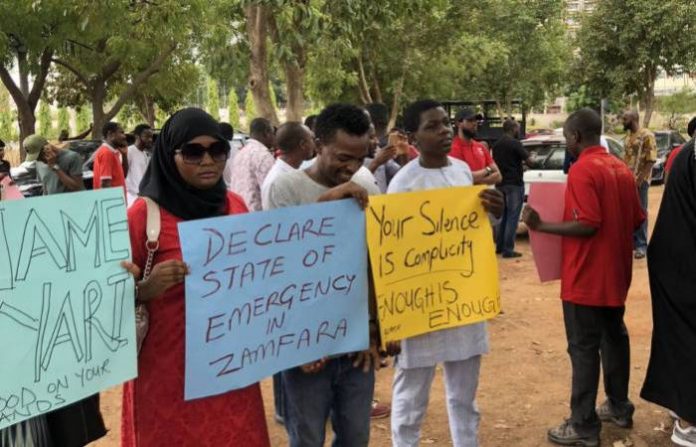 Indigenes of Zamfara State resident in Abuja have called on President Muhammadu Buhari to urgently intervene and stop the killings and kidnappings currently going on in the state.

The indigenes, who held a protest in Abuja on Saturday, decried the insecurity in the state which has resulted in apprehension, displacements of communities and loss of lives.

An organiser of the protest, Fatimah Mustapha, said their action was to call the attention of government to the gruesome killings and cases of kidnappings going on in Zamfara.

According to her, perpetrators of these evil acts are getting bolder day by day with little action taken by the authorities in Zamfara to arrest the situation and stop the act, hence the protest in the nation’s capital, Abuja, the seat of government.

Veteran journalist, Kadaria Ahmed, who was one of the organisers of protest, urged the president to direct security personnel to rise to the situation.

“We have the challenge of security situation all over the country, but that of Zamfara is clearly bad. We are tired of mass burial and that is why we are calling on PMB to intervene,” she said.

“Nobody is talking of these killings now among our leaders, and this is apparently disgusting. This issue involves lives and people deserve to be safe wherever they live in this country,” she said.

Zaharuddeen Bello-Imam, a former aide to Gov. Abdullaziz Yari of Zamfara, said the federal government should take decisive action against the kidnappers and bandits operating in the state.

According to Ms Bello-Imam, there is need for total overhaul of the security apparatus of the state to control the situation before the killing and kidnapping get out of hand.

Another protester, Aliyu Dansado, said the killings and kidnapping had affected farming activities in the state, adding that he was unable to go to his farms for some time because of fear.

“Government should rise up to action to end the killing and kidnapping, we have been paying ransom to kidnappers for the past five years now, people are killed on daily basis, government needs to do something now,’’ he said.

NAN reports that the protesters marched from the Unity Fountain, Maitama, Abuja, to the Presidential Villa where they presented their letter for President Muhammadu Buhari.