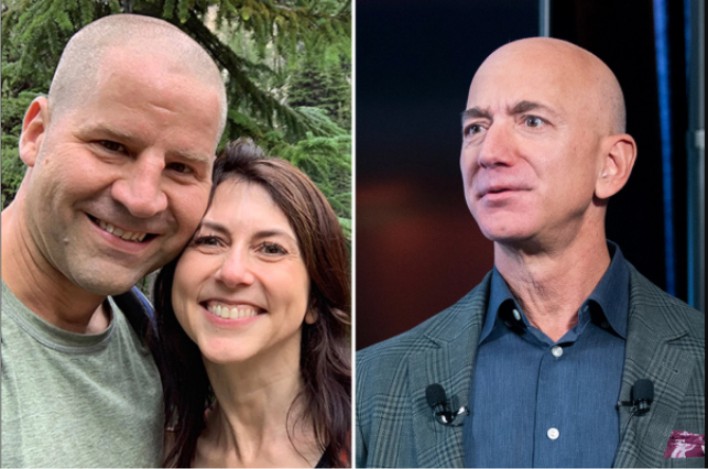 The 50-year-old, who is worth an estimated $53 billion, divorced the Amazon founder back in 2019 after 25 years of marriage.

She has now married Dan Jewett, a science teacher at the private Seattle Lakeside School where her children she shares with Bezos attend.

The private school where Jewett teaches and his wife’s children attend is for grades five to 12 and costs $38,000 per year.

The couple made their marriage publicly and spoke about their philanthropic plans in a post on the Giving Pledge – a site where billionaires and millionaires vow to dedicate a majority of their wealth to charitable causes.

In a statement on the Giving Pledge’s website, Scott said her philanthropic plans have not changed.

“My approach to philanthropy will continue to be thoughtful. It will take time and effort and care. But I won’t wait. And I will keep at it until the safe is empty,” she said.

Jewett indicated he plans to follow her lead. He said he intends to give away the majority of his wealth.

“I have been a teacher for the majority of my life, as well as a grateful student of the generosity of those around me,” he said in the Giving Pledge post. “This has meant doing my best to follow their example by passing on resources of all kinds—from time, to energy, to material possessions—when I have had them to give. And now, in a stroke of happy coincidence, I am married to one of the most generous and kind people I know—and joining her in a commitment to pass on an enormous financial wealth to serve others.”

Bezos, who shares four children with his ex-wife, said in a statement via an Amazon spokesman: ‘Dan is such a great guy, and I am happy and excited for the both of them’.

The divorce settlement Scott got made her among the richest people on Earth, currently holding a $53 billion fortune according to Forbes after receiving a quarter of Bezos’ Amazon shares.

The pair, who got married in 1993, first announced their separation in January 2019 shortly before the billionaire’s affair with Lauren Sanchez was exposed.