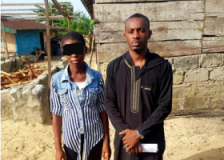 At Ekrata Ovwain community in Delta State, a man and his friend are currently on the run after allegedly defiling an 11-year-old girl.

It is alleged that the girl was raped by one Mr. Frank who forcefully dragged her with a knife into a house in Ovwian community where she was raped.

The suspect was said to have been aided by his friend who stood at the door and watched while the defilement was going on.

According to human rights activist, Israel Joe ( pictured with the victim ), the girl got pregnant after she was raped.

A petition has be written and duly received by the Burutu Area Commander in charge of the community as the police have been urged to do a thorough investigation and bring the culprits to face the full wrath of the law.

See the petition below.