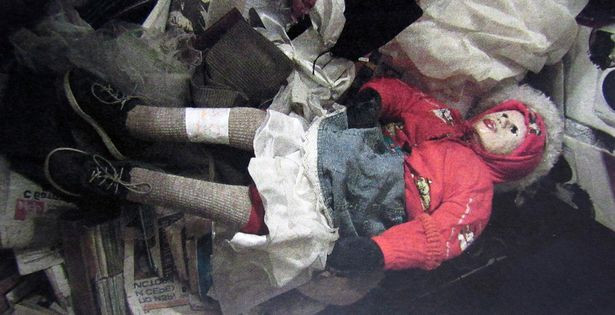 This is the story of a Russian historian who robbed the graves of not less than 29 female children and lived with their mummified corpses, applying lipstick and make-up to their faces.

Anatoly Moskvin, 59, reportedly robbed the graves of 29 children and lived with their corpses in a flat he shared with his parents in Russia.

According to the Daily Star, while living the mummified corpses, Anatoly applied lipstick and make-up to the faces of the deceased and wedged music boxes in their chests.

Appearing at a custody hearing, Moskvin refused to apologise for exhuming the bodies of the kids, and reportedly said their parents’ rights over them “ended” when they buried their daughters.

Moskvin, who has been begging for his release from a psychiatric hospital to care for his elderly mother, claimed his schizophrenia had been treated but refused to show remorse.

He said: “These girls are girls. There are no parents in my view.”

“I don’t know any of them. Besides, they buried their daughters, and this is where I believe their rights over them finished… So no, I would not apologise.”

Anatoly who was first detained in 2011 for the crime, confessed to 44 counts of abusing graves of girls aged three to 12.

He previously told the parents of the children they had “abandoned” their “girls in the cold” and said he had “brought them home and warmed them up.”

One of the corpses was murder victim Olga Chardymova, who was just 10-years-old when she died.

Her mother, Natalia Chardymova, 46, said she did not realise that the coffin was empty during her regular visits to her daughter’s graveside.

She has opposed  Moskvin’s release from the psychiatric hospital, saying “this creature brought fear, terror and panic into my life” with his “grotesque” abuse of the dead children.

She said: “I would be happy to know he will spend his life in the hospital. He is a sick person. From one side, it’s not good to be happy about this.

“But I will give me the chance to put a gravestone on the plot of my daughter. She was buried unnamed to prevent him finding her grave again if he is released.”

Moskvin’s mother, Elvira, 77, said she had seen the “dolls” but “did not suspect there were dead bodies inside.”

She said: “We saw these dolls but we did not suspect there were dead bodies inside. We thought it was his hobby to make such big dolls and did not see anything wrong with it.”

Elvira also accused the court of being biased against her son who was “not able to be in society, work, or get married.”

A judge last week renewed Moskvin’s detention in a psychiatric hospital for another six months.