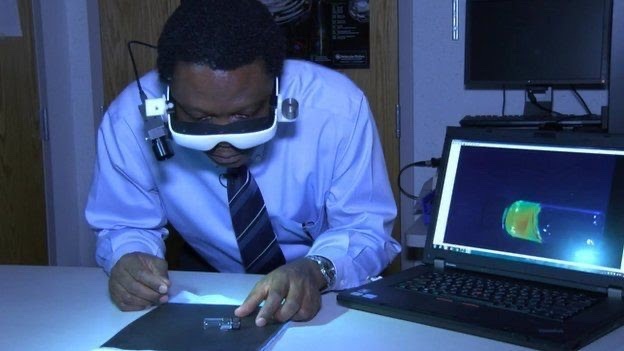 Samuel Achilefu was born in northern Nigeria in 1963. He moved to the south-east with his family when he was about five years old because of the civil war.

There, young Achilefu had his primary and secondary education until he won a French government scholarship to attend graduate school in France.

Abroad, he received a PhD in molecular and materials chemistry at the University of Nancy. He had his post-doctoral studies at Oxford University, training on the “interface between chemistry and haematology, working on developing blood substitutes”. He went on to join several research institutes and laboratories.

Before his creation, doctors found it difficult to completely remove cancer tumours during surgery.

This is why the Professor of Radiology, Biomedical Engineering, Biochemistry, and Molecular Biophysics was inspired to make these glasses.

“I thought, what if we create something that lets one see things that aren’t available to the ordinary human eye…?” he stated during an award acceptance speech at the Eric P. Newman Education Centre in St Louis.

Achilefu and his team spent five years on this wearable night vision-like goggles to help doctors differentiate between malignant cells and normal cells during surgery.

They did by making cancer cells glow by first injecting the patient with an infrared fluorescent marker which is picked up by the goggles.

This invention helps surgeons find the cancer cells and reduce the need for additional surgical procedures for the patients.

“A limitation of surgery is that it’s not always clear to the naked eye the distinction between normal tissue and cancerous tissue. With the glasses developed by Dr Achilefu, we can better identify the tissue that must be removed,” said Ryan Fields, MD, an assistant professor of surgery.

“My final goal is really to make it a routine system that we can use in all hospitals,” he said in an interview with Al Jazeera. “For brain surgery for example, where you do not have the luxury of taking a lot of tissue, and you have to be highly specific. In that particular case, these goggles would be a lifesaver. The goal is to be able to detect very small cells but the current imaging systems are not capable of doing that”.

Achilefu’s invention and ground breaking research has earned him over 30 local and international honours and awards.