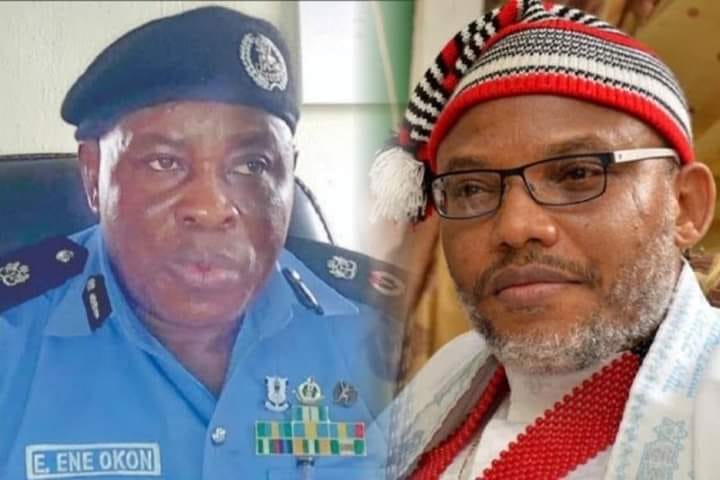 The Abia State Police command has stated that it is illegal for Nnamdi Kanu and IPOB to mount CCTV cameras round his hometown, accusing the IPOB leader of playing propaganda and maligning security agencies in the state with the burial of his parents, Eze Israel Okwu Kanu and his wife.

The police also accused Nnamdi Kanu of blackmailing the police in the state, insisting that the Force will resist attempts to truncate the peace currently enjoyed by the people of Afaraukwu community and Umuahia in general.

Addressing newsmen in Umuahia, the State Commissioner of Police, CP Ene Okon said the police is prepared to guarantee peace and security of Abians and residents during the burial ceremony slated to take place on Friday, February 14, 2020.

CP Okon denied allegation that he is trying to scuttle the burial ceremony of the late traditional ruler, saying he has mobilized men of the state command, prepared them well to ensure that there will be peaceful burial ceremony.

While revealing that half the number of Afaraukwu Community have deserted the area over mounting tension, he accused people he described as outsiders of attempting to hijack the burial of their Eze Israel Okwu Kanu and his wife.

The police chief alleged that intelligence report reveals that some people suspected to be members of IPOB were smuggled into the late Royal father’s compound, urging the traditional council of Afaraukwu not to allow IPOB members whom he said are outsiders to Bury the late king.

While frowning at the mounting of CCTV cameras, the CP said it is illegal and has security implications. While reiterating that the police is committed to a hitchfree burial of the late traditional ruler and his wife, CP Okon appealed to elders in the community to warn Nnamdi Kanu against scuttling the exercise through propaganda.