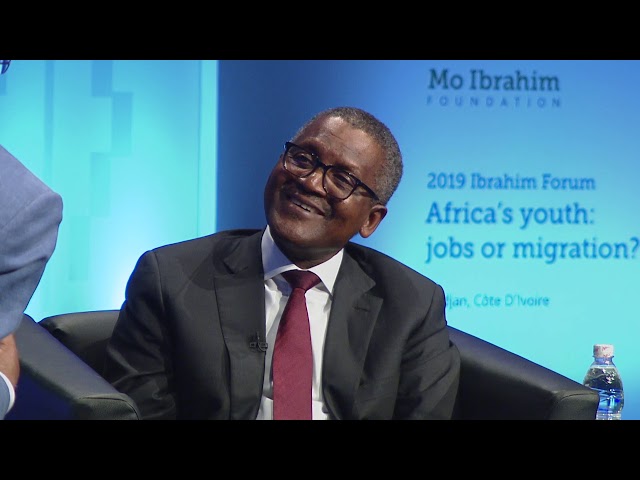 Here is the full interview Mo Ibrahim, the British-Sudanese billionaire had with Africa’s biggest industrialist and richest man, Aliko Dangote in Abidjan, Ivory Coast on 6 April.

It is an interview that must be watched by all Africans, leaders and the led for answers to a variety of problems holding the continent down.

He speaks about his industries, cement and the giant petro-chemical complex he is building outside of Lagos.

He speaks about doing business in Africa, the problems of visa and what African nations need to do to make Africa grow and create jobs for the millions of youths

Worthy of note is that it is this video that he narrated how he went to the bank to withdraw ten million Dollars to prove himself that he was rich.

Dangote says that the two most promising sectors for Africa’s future were agriculture and new technologies. But he advised young African entrepreneurs not to get carried away by the first flush of success.

“Often in Africa we spend our projected incomes. There are ups and downs” in business, he warned.

Dangote says he regretted the customs and administrative problems that hamper business development throughout the continent.

He cites the difficulties his cement group faces in exporting to Benin from Nigerian factories 40 kilometres (25 miles) from the border. Benin imported “more expensive” cement from China instead.

On visa crisis, Dangote says he was asked to get a visa before he could enter Angola despite being in possession of the African Union passport.

The passport is a common document that is set to replace existing nationally-issued African Union member state passports and exempt bearers from having to obtain any visas for all 55 states in Africa.

But despite the existence of this passport, some countries in Africa still insist on visas on the AU passport — defeating the entire purpose of the travel document.

“They have done this African Union passport; I carry six to seven passports because of visas. Even though I am an investor, I need visas in almost 38 countries,” Dangote said.

“Now they have issued us the African Union passport, a few of us. I didn’t pay for it. I’ve got one, and let me tell you this, [with] the one that I have, I went to South Africa quite Ok.

“But [with] this same African Union passport, I was invited by the president of Angola to come and see him, and I had to go — normally, I don’t travel much during fasting period, but I went.

“[But] I had to apply for visa, and intentionally, when I applied for the visa, I also applied on the African Union passport and I gave them that too to stamp on it.”

Dangote asks the African Union to fix the hanging issues around the passport and regional trade before the continent moves to the continental free trade agreement.

He says one of its factories in the southwest is only 28 kilometers away from Benin Republic, but the country does not allow Dangote import cement into the country as it prefers to buy from China.