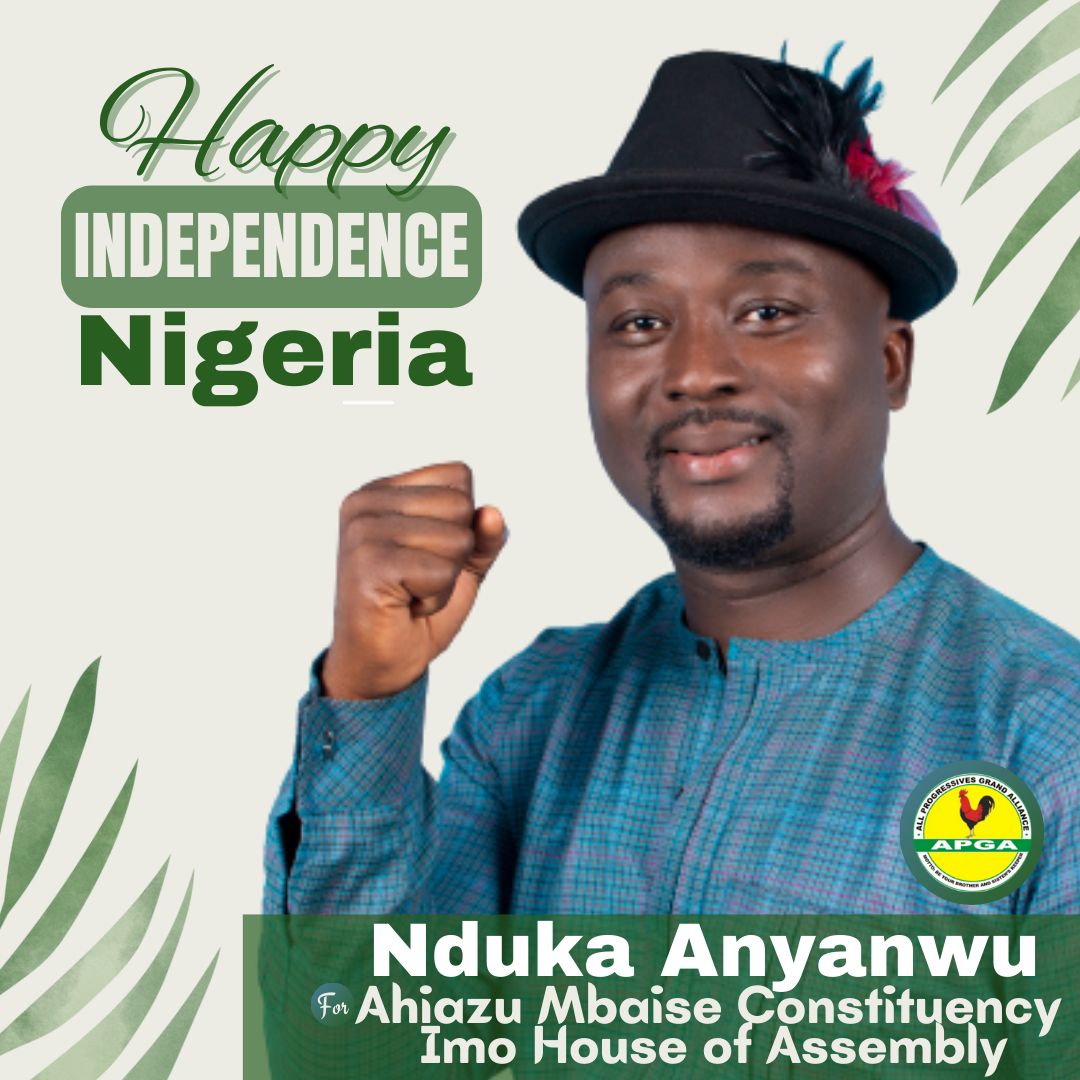 The candidate of the All Progressives Grand Alliance (APGA), for the 2023 Ahiazu Mbaise State Constituency election, Hon. Nduka V A Anyanwu, has eulogized Nigerians and Nigeria, on her 62nd independence anniversary, October 1.

Hon. Nduka, who spoke to newsmen on Friday, said that Nigeria is a great country, blessed with huge human and natural resources. He also stated that Nigerians are great people, who are doing exploits in their different fields of endeavours, both at home and abroad.

The APGA candidate regretted the many hardships Nigerians had faced over the years, owing to mis-governance, and assured that better years are still ahead, with God on the throne. Nduka enjoined Nigerians not to give up, rather to take their country by their own hands, come 2023 general elections.

Nduka, who goes by the title, Anyanwu N’etiri Oha, hinted that Nigerians should be ready to go to the polls and rewrite the narratives by voting out bad leaders and electing those with people’s interests at heart. He posited that the many years of misrule of the PDP and APC have little or nothing to show and advised Nigerians to reserve their votes for parties known for performance and those with credible candidates.

Speaking further, Anyanwu N’etiri Oha informed that his debut into politics is to rewrite the narratives and show the people, especially of Ahiazu Mbaise, that political office is for service and not personal aggrandizement.

In his words, “I am going to serve and not to be served. Neither am I going for selfish reasons.”

“I joined politics to redeem my people from political subjugation, especially from those whose interest is to jeopardize the people’s happiness”, he continued.

“If elected, my people will heave a sigh of relief. They will realize what they have missed over the years”, Nduka assured.

Recall that Nduka V A Anyanwu, emerged the candidate for the Ahiazu Mbaise state Assembly seat, come 2023, under the platform of APGA. It is also on record that Nduka, is a known philanthropist and businessman, with chains of businesses, spanning across Nigeria, South Africa and America. Nduka Anyanwu Foundation, is his brainchild, through which he gives back to the society.