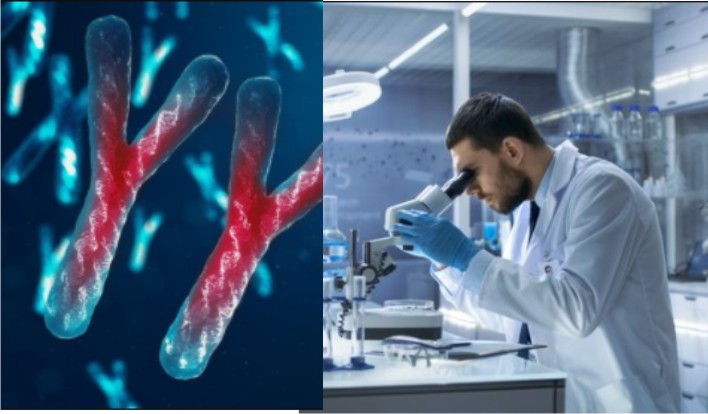 The male-determining Y chromosome could be dying out and this has prompted discussion of whether men could disappear with it.

The Y chromosome has far fewer genes than the X and research suggests it’s gradually shrinking even further.

A person’s sex is determined by whether they have two X chromosomes (which causes ovaries to develop) or an X and a Y (which results in testes).

X has approximately 1,000 genes while Y has just 45 and research suggests the Y chromosome is gradually shrinking even further.

Genes develop mutations over time, some of which are harmful. Chromosome can avoid passing on such harmful mutations by mixing and matching with each other during meiosis — the stage of foetal development during which our forming bodies develop sperm or eggs.

This process breaks up the genes and makes it more likely that only strong, non-harmful ones get passed on.

However, only X chromosomes can swap with each other, while Y isn’t similar enough to combine.

Because individuals don’t (generally) have two Y chromosomes, Y can’t recombine with itself and thus it has become smaller and smaller over millions of years of evolution.

Research conducted by Jennifer Graves, a geneticist at La Trobe University in Melbourne, suggests that 166 million years ago the Y chromosome had a similar number of genes as X, approximately 1,669.

“So it doesn’t take a great brain to realise that if the rate of loss is uniform —10 genes per million years — and we’ve only got 45 left, the whole Y will disappear in 4.5 million years,” she told Live Science.

Research suggests the rate of degradation has slowed over time, and that the human Y chromosome has lost only one gene since humans and rhesus monkeys diverged 25 million years ago.

But losing the Y chromosome completely is still a possibility, as it’s happened to other species including underground rodents called mole voles, as well as certain species of spiny rats in Japan.

This doesn’t necessarily mean that men are doomed, as the loss of the Y chromosome doesn’t erase the male sex from a species as both spiny rats and mole voles still have males and females.

“People think that sex is sort of a very determined thing,” said Rasmus Nielsen, a geneticist at the University of California, Berkeley.

“In truth, 95% of genes that are expressed differently between males and females don’t actually live on the X and Y chromosomes.

If the Y chromosome was to vanish, another gene would likely take over as the main determinant of sex during human development.