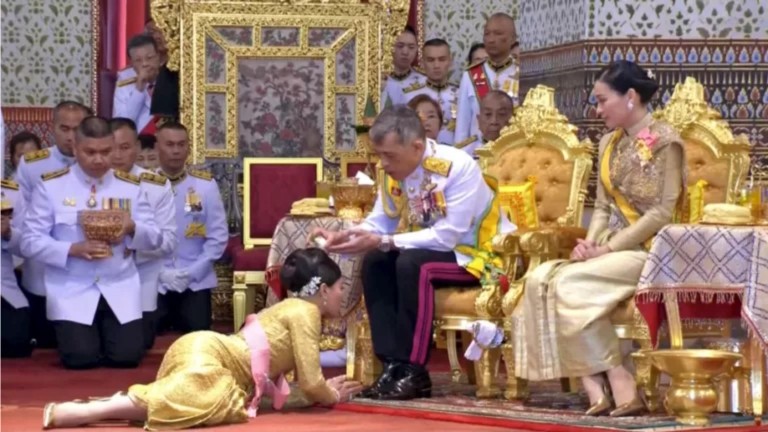 The newly crowned Kind of Thailand, Maha Vajiralongkorn on Sunday partook in the second day of the three-day coronation activities with a ceremony to grant new titles to members of the royal family.

Maha Vajiralongkorn, center, and Queen Suthida, right, took part in the ceremony that includes bestowing of the royal title and granting of ranks to members of royalty at Grand Palace in Bangkok, Sunday, May 5, 2019.

Vajiralongkorn had on Saturday taken part in an elaborate set of rituals, a mix of Buddhist and Hindu Brahmanic traditions, which established his status as a full-fledged monarch with complete regal powers.

He had already been serving as king since the October 2016 death of his father, King Bhumibol Adulyadej.

The 66-year-old Vajiralongkorn began Sunday morning’s event before dignitaries in a hall at Bangkok’s Grand Palace by paying respects in front of portraits of his late father and mother, who has been hospitalized for an extended period.

His mother, who was Bhumibol’s queen, was granted a new official title of Queen Mother.