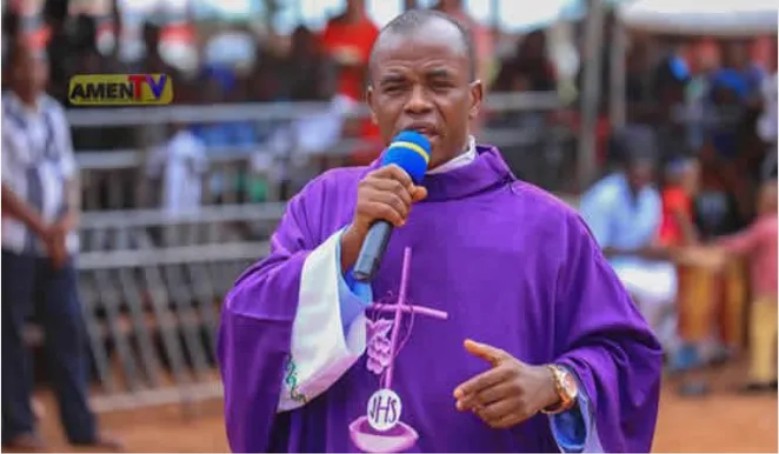 Reverend Father Ejike Mbaka, the Spiritual Director of the Adoration Ministry, Enugu, has said that President Muhammadu Buhari need to apologize to Nigerians youth because they have also failed like the previous administrations.

While speaking on a message, entitled “Impure Heart” during the 2020 All Saints Day Holy Mass at Adoration ground, Mbaka noted that the recent #EndSARS protests, as well as other forms of agitation and unrest by Nigerian youths, is as a result of the failure by past and present governments to address the developmental needs of its people.

Mbaka noted that President Buhari had the opportunity to correct some of the wrongs but also failed to live up to expectation, adding that the President is been fed wrong information by sycophants who have his ears.

“This country can never be the same again!” Mbaka stated.

“Did you expect these young men to keep watching the country being swindled and looted dry by the so-called leaders? Some of the young men, who are now fast getting old, had started working for the criminals in authority, hooligans in power, since they were very young.

“Just one day that they came out to say they are not happy, you began to kill them. And after killing them, you carry their corpses and dump inside rivers and valleys? Nigeria can never be the same again!

“The worst thing is that those hooligans in power think that the world is their home. They have acquired houses and other possessions in Abuja and other areas within and outside the country, with our wealth, but they cannot be wise to build good industries to provide jobs for our growing youths. That is my worry.”

After speaking without mentioning specific leaders for a while, Mbaka later called out President Buhari specifically, noting that he has surrounded himself with many sycophants feeding him lies.

The Priest added that the current administration should repent and apologize to Nigerians for the many years of misrule, including those of previous administrations.

He called on the current crop of leaders to realize that one day, they will no longer be in power, further stating that wicked leaders must realize they will also one day give an account of their deeds before God almighty.

He said: “(President) Buhari, who could have been a solution to this, succeeded in encircling himself with criminals and hooligans, people who do not just tell him lies, but rather, they magnify lies – lies with NAFDAC number – and feed him!

“We are celebrating the All Saints Day today. When we talk about the Saints, the contrast becomes the living, we who are still on earth. How are we preparing to go there? What seed are you planting? It is a botanical impossibility that you would plant maize and harvest yam.

“Our leaders seem to be reaping the seeds that they had planted o. When somebody that you had not given job comes out to say that he is hungry and angry, it was you that attracted such protest, in the first place. Do you know how many youths that have died due to hunger?

“The living government needs to apologize, and they should also apologize for the errors of past governments. The President will die one day, Senators will die, governors will die whether they have 1 million security (details) and sirens or not.

“One day, in this country, we will experience a phase where people will protect themselves but cause insecurity for you, leaders, when they see a siren ferrying you by. We are all Nigerians and all of us have share in this commonwealth. The solution is repentance, but can they repent? That is the problem.

“But one day, God will raise a Moses that will put all of them in the Red Sea; just one day, unless they repent. “It is not a case of #EndSARS or Biafra. God is telling these leaders today, that they are wicked maggots, wicked hooligans and that they should know that this world is not our home. They should understand this fact.

“And those who say they do not want to be misunderstood, and so, they do not want to join Fr Mbaka to talk, the fact is that even if you refuse to talk and lock yourself up for 100 years so that they will not say that you are fighting government, one day, you must still die.”

The cleric also added that his words were not any direct attack on any government or person but a wake-up call to all those in leadership positions in Nigeria.

He warned that rather than face governance, some of the politicians have started strategizing for 2023 but he warned that citizens who have been left frustrated may turn against them one day and they may not even be able to contest the 2023 general elections.

“Nobody is fighting any government, we are fighting bad governance. Our leaders are evil; they need a man under anointing to tell them that if they do not repent, the way that the corpses of our young men were thrown into the valleys of Ugwu Onyeama at the Miliken Hill, one day, their bodies will be there too!

“Last time, I was talking about those who had begun to jostle over 2023 (election), how are you even sure, with all this phenomenon, that there will be election in 2023? Our youths are hungry, and a hungry man is an angry man! “I told you that the difference between anger and danger is just ‘D’. If you put ‘D’ at the back of anger, it becomes danger. And when someone becomes dangerous, that person becomes a psychiatric personality.

“You see young men and they will be daring you to shoot, that they would rather die. I have no food, no job, no house and no hope, they lament.

“Parents will send everything they have and go hungry just to send their children to school and after the children graduate there would be no jobs for them; then the parent falls sick and there would be no money to send them to the hospital. Can you imagine the kind of anger that would be in such families? That is why you see parents ageing young, many of them suffer stroke, paralysis at age 56/60.

“All those jostling for National Assembly positions and others battling to become governors so that they will have immunity, do you think that these young men and women will be watching you just like that? One day, enough will be enough. “If you care, may your name become Nigeria, whether you are a governor or not. But let this message enter your ears, and God is above watching the affairs of wicked leaders.”

Mbaka urged religious leaders to speak to those in authority and admonish them to fear God in their dealings with the people, adding that rather than threaten or kill innocent youths, the government should rather negotiate with the angry youths after apologizing to them.

“If people who are under anointing fail to speak up in defense of the less privileged in this country, God will curse us all. “Jesus said, fear not those who can kill the body but cannot kill the soul but fear only He who can kill the body and destroy the soul. And that person is God. Nigerian leaders should understand the God factor.

“There is God, the Adonai, Elohim and El Shaddai!” Mbaka said. Speaking further, the priest sounded a warning: “Therefore, all our leaders who are getting ready to shot and kill, to order security agents to kill people, I laugh at them. “You better repent because intimidation cannot succeed in this country anymore. How many are you going to kill? As it is said, how many fowls will you eat in your house and you will be satisfied?

“How do you want to reason with the youths when they have seen where there palliatives are parked? A billionaire will be hording noodles that are meant for poor people and you want these poor people to fold their hands and be watching you? They cannot kill everybody because there are saints in heaven and the saints will be interceding for the Nigerian youths. Even the Pope has prayed for Nigerians and so, this wickedness cannot continue.

“The protest that the youths embarked on recently is what is called life of martyrdom. Some people have to suffer to change the country. If you suffer to bring about change, wellness and godliness to a country, you are on the course of becoming a saint. “Saints are those who are ready to die for the good course”, He said.