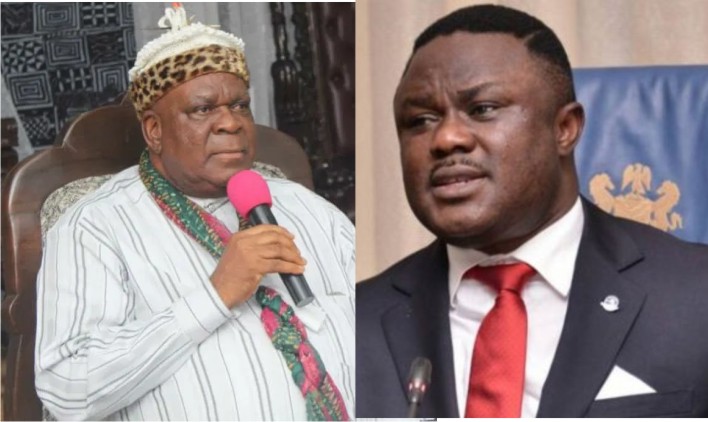 The Obong of Calabar, Edidem Ekpo Okon Abasi Otu, V. believes that Governor Ben Ayade of Cross River State has a hand in the wanton vandalism, looting and destruction of public and private property which occurred in the state last week.

He called on the Governor to step aside to enable an interim administration to come up so that he can learn how administration and governance should be handled.

The Obong, who spoke when a former Governor, Liyel Imoke, paid homage to him, said the attack happened partly because the Governor was not holding regular security meetings.

“He has not been holding security meeting regularly.

The Obong said Gov Ayade does not pick his calls even after calling him several times.

He urged the Governor to have a change of attitude, stressing that every critical stakeholder should have access to the governor.

“The Governor should be able to open his door for people to come in, and should work with everybody,” the Obong stated.

The monarch asked the former governor to tell Ayade that the state cannot continue the way he is going about governance.

“We have to face it; we don’t need to play around with it; we cannot continue this way.

“You tell him that there is a need for total reconciliation; a total rehabilitation of whatever he has been doing.

“Everybody matters in this state. He should be able to talk to people.

“He wouldn’t call you and even when you call him, he doesn’t answer the call. Nobody talks to him.”

Speaking earlier, Imoke told the Obong that in the wake of the incident, he thought it wise to seek the help and cooperation of the traditional institution in finding a way out of the problem.

He said: “We do not understand the extent of the carnage.

“We are all victims of this incident.

“If you were not hit directly, you were hit indirectly.

“For me, I was hit directly, so to very many public officials. They were also hit directly.”

However, a media aide to the governor, Christian Ita, said it is very doubtful that his principal would ignore a call from the Obong of Calabar, stressing that the governor holds him in high esteem as the traditional father of the state.

“He couldn’t have ignored the monarch’s phone calls. It is unfair for him to call for the governor, who has done all in his power very sincerely to enhance the fortunes of he state, to step aside.”